When it comes to what I need from my phone, I am a strict utilitarian. I don’t care how sexy the curves are or how much the exterior shines. I need a device that is willing to be my lifeline to the online world while I am schlepping through the outside one.

So when Motorola’s new Moto X Pure Edition (named the Moto X Style in some countries, starting at $400 unlocked through Moto Maker in the U.S.) graced the office today, showing off its brand-new sleek physical design and large screen, I decided to drag it through the streets. So I took hold of the beautiful little device and put it to a true test. Let’s take a ride to Oakland. 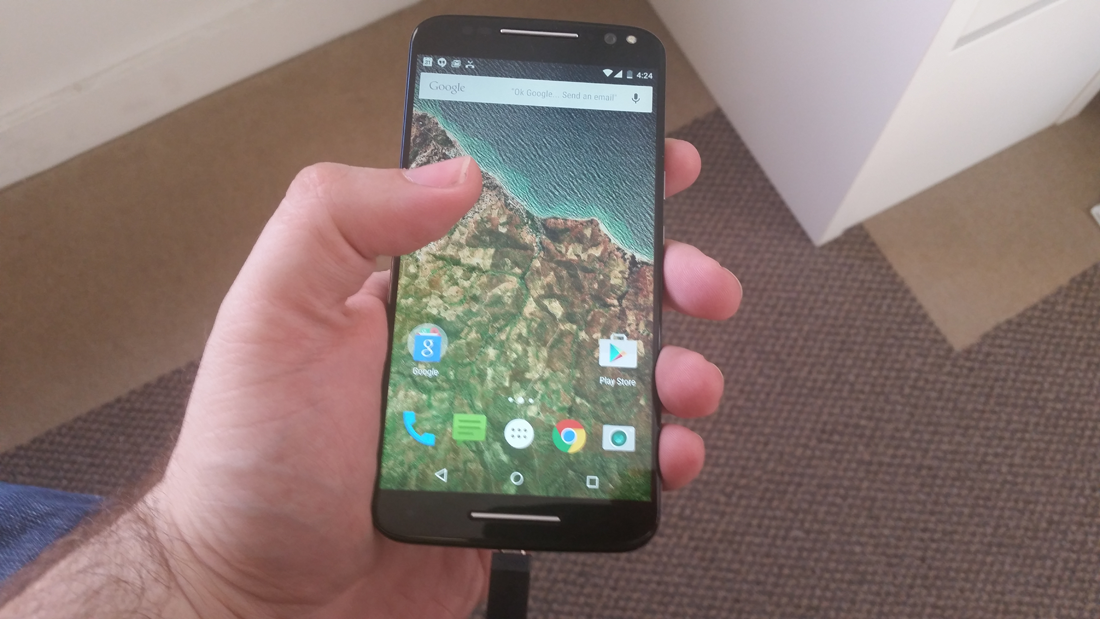 Above: So … maybe if I shove it side ways with my ring and pinkie finger, my thumb will be able to slap the Play Store shortcut

If I’m lying in my bed, watching something on Netflix on the Moto X Pure Edition, the device’s size works great. For just about everything else that I have to do that is boring and adult, and the environments I have to do those things in, my biggest hang-up is the size. This isn’t so much something that the Moto X Pure Edition is guilty of alone, however; it’s an industry-wide thing.

Every year, the size of smartphones creeps up, and my pocket has already hit critical capacity with just my Samsung Galaxy S5. And as with every upgrade, this phone is making a little bit more progress in its quest to peak at the outside world from the confines of my Lee’s.

Then there is the difficulty of trying to one-hand the device, which is how I have to handle my smartphone during my commute. Where my thumb can barely reach the far corners of my Samsung Galaxy S5 using a palm grip, I can’t touch the far sides of the Moto X Pure Edition without doing a risky finger-roll move.

You know the maneuver. The smartphone is sitting comfortably in the palm of the left hand, with the right hand locked in a death grip on the grab bar on the commuter train. In order to touch something on the far end of the screen, the four pointing fingers have to lift and roll the phone up to get the far edge closer to the thumb.

It’s simple enough to do when sitting at a desk, but it’s an extreme challenge when I am walking down Market Street or performing a balancing act standing inside a herky-jerky commuter train. Above: OK, Moto X, turn around and face the floor.

As I tried to perfect my finger-roll technique while standing on the train, I found that the other physical traits of the phone were intelligently thought out. I really like that Moto phones have their power and volume buttons positioned on the right side, which line up perfectly so that the index and middle fingers of my left hand rest naturally on top of them.

The sensitivity of the switches seems on-point. Any light tap of the power button causes the device to respond; full activation requires a slightly harder input.

The spine of the Moto X Pure Edition’s back has a nice convex slope that feels friendly resting on the palm and grooves of the fingers. The material on the back, however, is a bit slippery for my liking. Seeing as I tend to wrap my new smartphones in a case of some kind, this is an issue that winds up resolving itself, but it’s still worth bearing in mind.

The data/charge port is the only thing on the bottom plane of the phone, making it a one-prong slot. Look, I tend to charge my devices before going to bed, which means a lot of extra fumbling and juggling in the dark. Simplicity is definitely a plus for me. 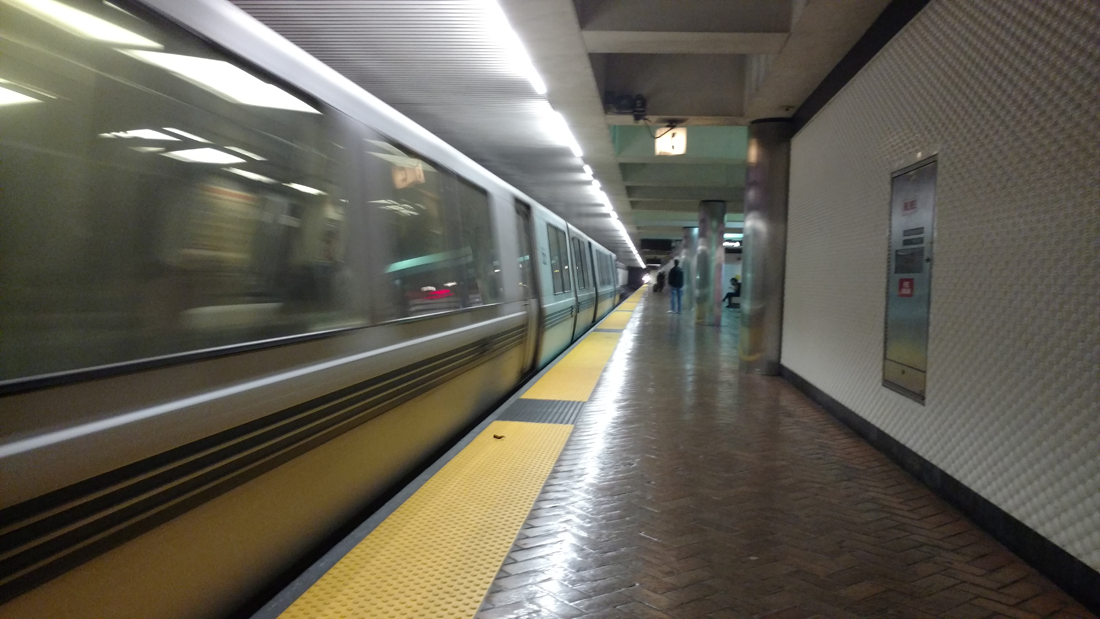 Above: Shooting with the Moto X using default settings, under artificial light, with a train heading to the East Bay going to full speed.

The Moto X Pure Edition’s 21-megapixel rear-facing camera is great for taking quick shots in everyday situations. I appreciate that the zoom requires rotating a UI widget with one finger, as opposed to pinching and stretching with two. The amount of light coming into the aperture can be controlled similarly, although this feature seems to stick within a small range.

Still, some people may not care about the lighting function. Hell, in our viral world, where we shoot on the fly to capture such things as a man fighting an elderly woman for the last seat on the train, most people don’t have time to adjust light and zoom. With that in mind, I made sure to take some random shots in various lighting to show what the camera can do under default settings. 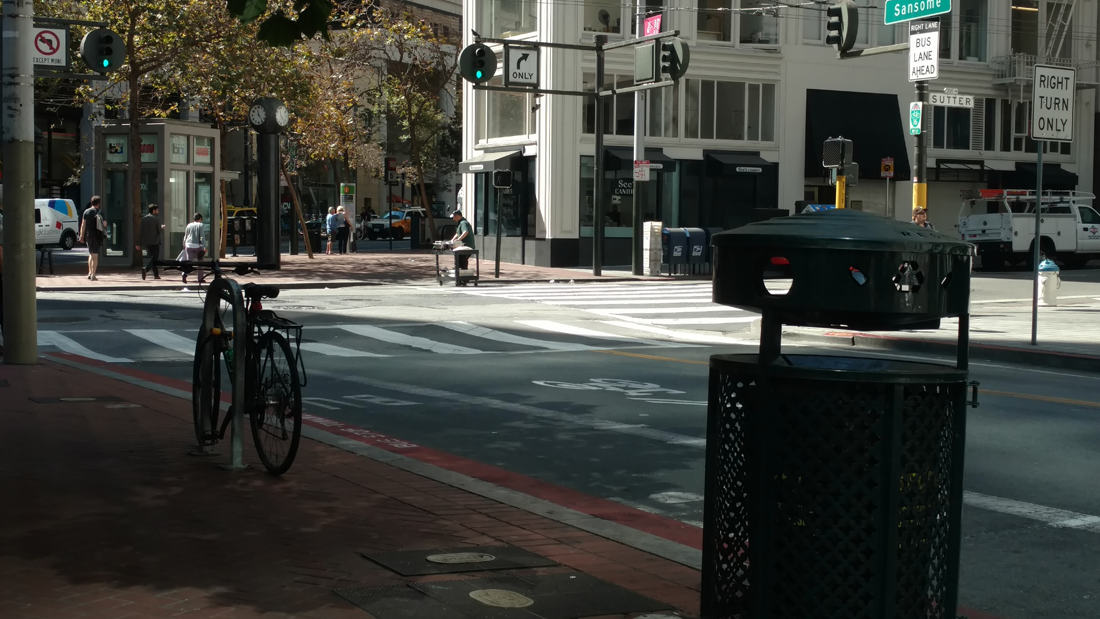 Above: Shot with the Moto X. Under shadow, aiming toward a fully lit background. Testing how the camera deals with lighting and extreme foreground, middle ground, and far background objects.

The results were pretty good for a camera phone. Even when I swung the camera violently or tried to trick it with a moving object, it did a great job of auto-focusing quickly and differentiating what needed to remain in focus. The longest it took for the lens to focus was about half a second, and that was after a pretty violent swap from an up-close object to a wide shot with subjects in the foreground, middle ground, and background. 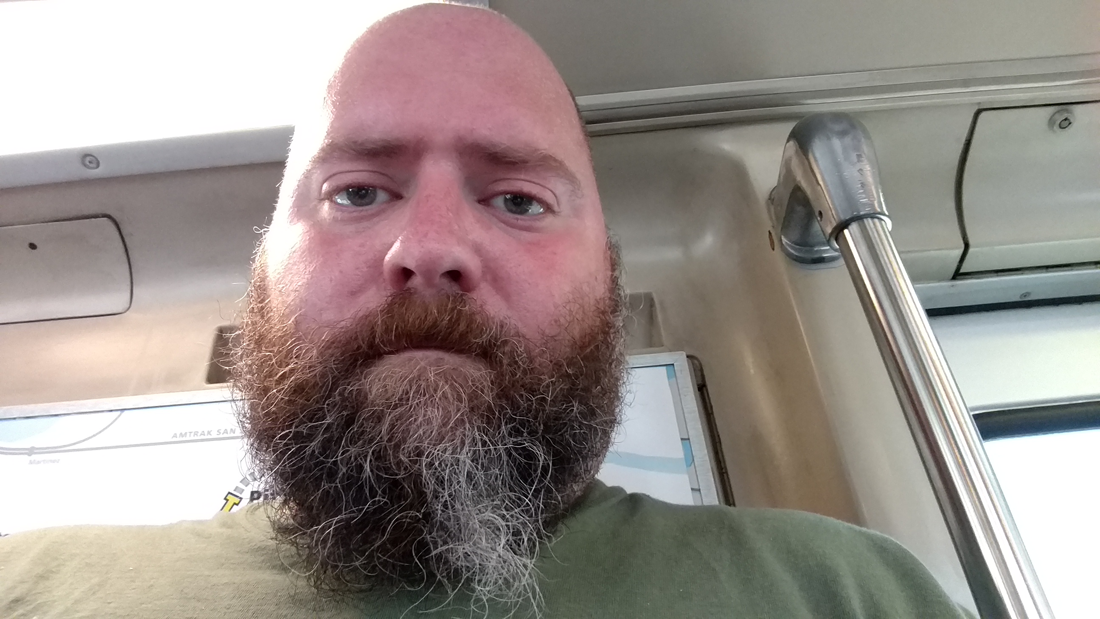 Above: I hate selfies. …

And for the hell of it, I tried the five-megapixel front camera. The only thing I hate about this is having to take a selfie.

As much as I complain about the size increase, the large screen on the Moto X Pure Edition is beautiful when it comes to playing games and watching videos. The screen is bright, with sharp colors and a crisp high-definition image.

What impressed me most, however, is the external audio. The Moto X Pure Edition uses a dual speaker stereo which gives sound for games and video richer depth and range compared to my Samsung Galaxy S5. It’s not a high-end home-theater experience — and for fuck’s sake it’s a phone, so let’s not push it there — but it’s so much clearer and layered than what I am used to.

Would I upgrade to this?

If I needed a new phone? Definitely.

I’d bitch and moan about the size of the thing and how the industry keeps pushing for larger devices. But as is true for most of us dopes, when I see a larger screen and improved audio for movies and games, my principles take a back seat as I hand over my debit card. I’d assure myself that the stitches in my pants pockets could stretch a little bit more for the team.

The thing is, I’m not in need of a new phone, so I won’t. The entertainment value of the screen and speakers is great. The camera is wonderful. But I don’t think that’s enough to justify dropping the cash ($400), when what I have works fine for stuffy adult tasks like emails, text messages, and phone calls. I know that is boringly practical of me to say.

I’m just going to have to keep one-handing my old Samsung Galaxy S5 while BART’ing through Oakland.

Motorola sent VentureBeat a Moto X Pure Edition for the purposes of this review.