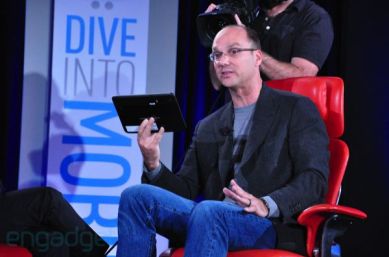 Now that Samung’s Galaxy Tab is out, Motorola’s Android tablet has become the iPad competitor to pine over. Google’s Andy Rubin briefly teased conference-goers with the device at last week’s D: Dive Into Mobile event and since then even more details have leaked out.

The unnamed tablet features a 10-inch screen, runs Android 3.0 (which goes by the codename “Honeycomb”) and is Verizon bound, tipsters tell the gadget blog Engadget. It’s apparently driven by an Nvidia Tegra 2 processor, contains 32 gigabytes of storage, and has an expandable memory slot for up to another 32GB. And like every new tablet on the horizon, it sports front and rear-facing cameras.

The news confirms previous reports on Motorola’s tablet. We’ve known that Motorola was working on a 10-inch Android tablet for months, and we also reported that it would likely be the first device to run Android 3.0.

By bringing the device on stage, Rubin surely knew he was going to excite Android fans and gadget bloggers. I suspect that Motorola will show it off even more at the Consumer Electronics Show next month in Las Vegas (and VentureBeat will be there to grab the details). Don’t expect to see it officially released until several months into 2011, when Google is expected to release Android 3.0.

Check out some spy photos of the tablet below: