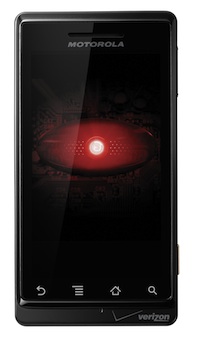 Motorola and Verizon just released the official details of their upcoming Droid phone, the first to use Google’s Android 2.0 operating system. Most of the features were already known, but the announcement gives us a concrete launch date and price — the Droid will be available on Nov. 6, and will cost $$299 ($199 after a $100 rebate) if you sign a two-year Verizon contract.

The Droid is being marketed as the anti-iPhone via the “Droid Does” marketing campaign, which highlights all the Droid features that the iPhone lacks — the ability to run simultaneous apps, take night photos, switch batteries, and more. My editor Matt Marshall is particularly excited about the improved touchscreen interface, increased speed, and the support for Microsoft Exchange — in fact, he said the Droid allows him to get rid of his iPhone.

Oh, and today’s announcement also means that Nov. 6 will be the first day users can try out Google’s turn-by-turn GPS navigation, which will be included for free on Android 2.0 phones