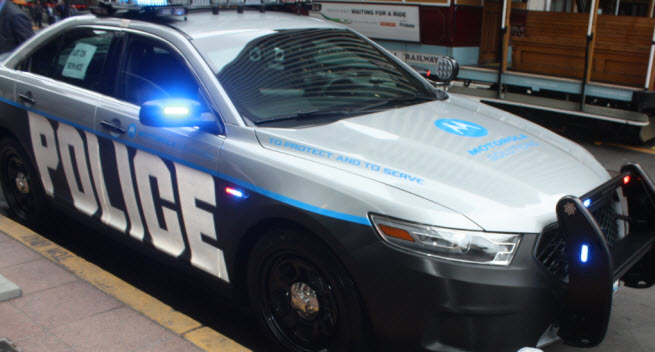 We went for a spin in the police car of the future, and it’s loaded with all sorts of high-tech cameras and computers. 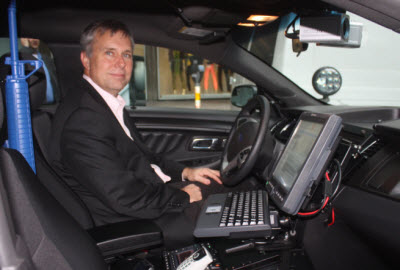 he folks at Motorola Solutions, the $8.5 billion communications technology company, cruised through San Francisco with a prototype connected patrol car that had broadband connectivity, multiple computers, a bunch of cameras, and all sorts of capabilities to assist police officers in real-time. After all, if anyone needs to get information fast, it’s an officer at the scene of a crime or emergency in progress. 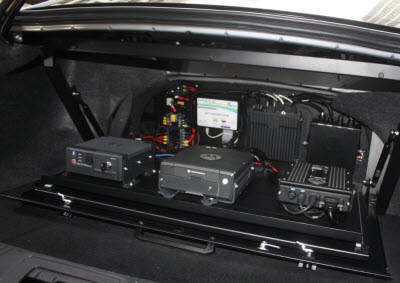 The first-responder technology taps technologies developed for the enterprise, from wireless broadband networks to radio-frequency identification readers. The car’s main MW810 mobile ruggedized computer workstation has a keyboard and touchscreen display, but you can operate most of its functions via voice commands. You can unlock a gun with a button command, or turn on the siren with your voice. Scanners and sensors can extend an officer’s field of vision.

“We can provide a lot more information than a person can assimilate,” Steinberg said. “The trick is to supply enough information in a way that will be useful.”

The car has multiple boxes in its trunk, including one that serves as a kind of digital video recorder for the seven cameras that are attached to the insides and tops of the vehicle. (There are four on top, two on the rear-view mirror, and one looking at the back seat — the “perp camera” for keeping an eye on an arrested suspect). The cameras can read license plates at 100 miles per hour. 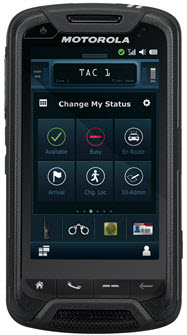 The car is just the centerpiece of the technology that officers can use to deal with criminals who are more and more sophisticated. Motorola Solutions makes all sorts of emergency gear, including modern walkie-talkies that collect global positioning system (GPS) location data and can hop to multiple frequencies. 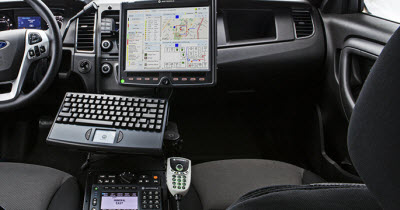 Motorola also makes an LEX 700 Mission Critical Handheld (pictured right) that delivers street data over public safety LTE networks, which operate at the speed of consumer 4G networks or faster. It also makes secure phone calls and can connect via multiple radios, including 3G, WiFi, and Bluetooth. It operates with voice or push-to-talk functions and has a display that can be easily seen in direct sunlight.

The device has a total of eight antennae and six radios, and it runs the older Windows Mobile operating system. It is designed to be upgradeable to Android. The phone launched earlier this year. Motorola Solutions will also have its own tablet computer, dubbed the ET1, available soon as well for first responders.

The cameras enable some interesting applications. If an officer stops a car for a traffic violation, the cameras can record the license plate and start the paperwork for a traffic citation. The officer can verify the identification of the driver and then initiate the automated completion of the citation paperwork. Motorola Solutions calls its ticketing process eCitation, and it should reduce the amount of time that officers have to spend at headquarters to file their reports.

“If you do it this way, errors don’t creep,” Steinberg said. “The more automation, the better. They can get more of their real work done.”

The vehicle becomes a virtual partner. It can play video retrieved from a wireless broadband connection. Officers can use it to look up records instantly and use the cameras to capture evidence videos or pictures at an accident scene. The car can also become a wireless hot spot for handheld devices and can store video on a big hard disk in the back seat wall or upload that video to police headquarters, where others can analyze it. 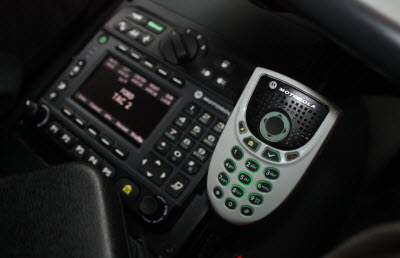 With the cameras, officers can constantly scan the license plates of cars driving down a highway. An alert comes up if a car belongs to a wanted criminal or someone with an arrest warrant. The car can recognize a license plate, look up the owner’s information, and then show the face of the likely driver. Or at least that’s the idea. 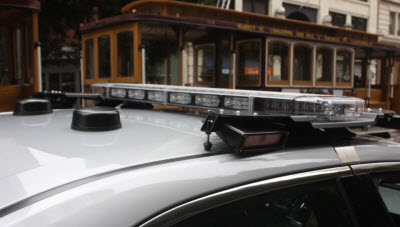 Steinberg said the cameras can be a safety system as well. With 360-degree video, the vehicle can alert an officer during a traffic stop if someone is sneaking up from behind.

“That’s not possible today, but you get the idea for what could happen in the future,” he said.

Steinberg said that police departments that adopt technology like this prototype car have to deal with a lot of policy questions. What happens, for instance, if a court orders the department to provide video records from a car as evidence in a trial. The department would have to find a way to store a huge amount of video evidence. 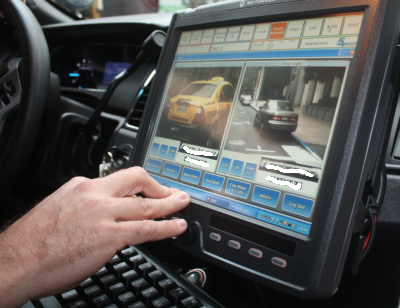 Over time, Steinberg foresees more technological change. Police cars might be able to access videos in fixed cameras at locations throughout a city. Or they might be able to turn the windshield into a heads-up display so that a driver wouldn’t have to look down at a computer to get more information.

“You could move from optimized responses to predictive policing,” he said.

If that’s starting to sound a little like the “pre-crime” investigations in the film Minority Report, well, you’re not alone. It might make the police too powerful. And all this technology could make the cars tempting to hijack or steal. They can, however, be disabled via remote technology, and the cars will be able to use wireless identification to determine whether the driver is an officer or not.

Motorola Solutions has studied lots of scenarios for the impact of the prototype police cars. Now it remains to be seen how quickly police departments will adopt it.