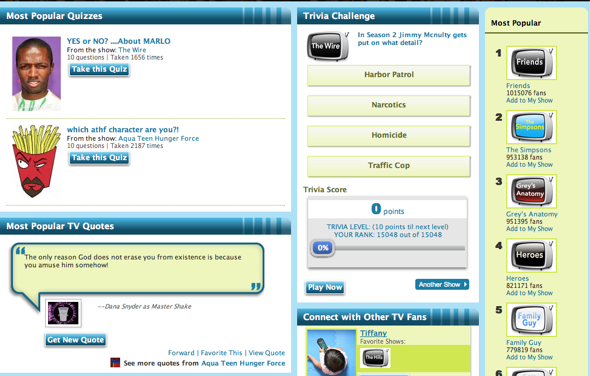 Until today, Watercooler has been a social-network application developer, building hundreds of fan apps for TV shows and sports teams. Now, it’s launching a site called TVloop.com that will put some 20,000 pages of content generated by its social network users onto the web. Pages on the site will include things like message boards and blog posts created by fans for more than 200 popular TV shows. The site will also include games and quizzes already offered through Watercooler apps.

Other sites will also be able to embed content from TVloop.com, giving their own users access to Watercooler content and features. One is Lost.com, an independently-owned site for fans of the TV series Lost. Partners will be launching these widgets in the next 30 days, the company says.

TVloop.com is a way for the company to reach new users — and advertisers. It is aiming to have its pages appear high in search results when people look for information about shows. It hopes to attract an audience beyond the 6 million users who tap into its Facebook apps every month, and the 1 to 2 million users on MySpace and other social networks. The obvious rationale: Many sports and TV fans out there use the web but not social networks.

The new site will include videos of some shows already available for viewing on Watercooler apps. The company inked a deal with broadcasters to offer some shows on apps earlier this year. For now, shows syndicated through Hulu will appear on the new site. And shows from other partners will likely appear soon, Watercooler chief executive Kevin Chou tells me.

The new site also provides a way for the company to sell more inventory to advertisers. Many alcoholic beverage companies want to sell their products to sports fans, for example, but they worry about having their ads appear in front of underage social-network users. Watercooler’s app users range from age 13 to 30. Facebook recently released a way to require age verification for users, so Watercooler can now start selling beer ads to of-age football fans on the site. Still, other social networks have yet to launch this feature, and Watercooler wants to expand its advertising business. The company has already been working on its own user-targeting ad technology, and it will implement it on the new TVloop.com site.

But it’s not just about ads. The company also offers an e-commerce service, where users are shown links to purchase items that appear on shows. So if Grey’s Anatomy character Meredith Grey wears a nice sweater in a particular episode, fans might see a link to a site that sells the sweater. The e-commerce feature just launched on Watercooler’s apps, but it will also appear on TVloop.com.

The company is trying to fit all of these pieces together. It plans to run ads and e-commerce links within its widgets, and share revenue with partner sites. When users create content on TVloop.com, the company will push it out to its apps.