Mozilla today announced that Firefox will soon block web trackers by default. In conjunction, Firefox will also let users control what information they share with sites.

Mozilla shared details on three tracker-blocking features it is building into Firefox:

Just like how Google sees Chrome blocking some ads by default, Mozilla views Firefox blocking trackers as an extension of the pop-up blocker. Here is the company’s reasoning for the decision:

Some sites will continue to want user data in exchange for content, but now they will have to ask for it, a positive change for people who up until now had no idea of the value exchange they were asked to make. Blocking pop-up ads in the original Firefox release was the right move in 2004, because it didn’t just make Firefox users happier, it gave the advertising platforms of the time a reason to care about their users’ experience. In 2018, we hope that our efforts to empower our users will have the same effect.

Mozilla wants to make it clear these features are aimed at users, and websites will have to adjust accordingly.

Try it now in Firefox Nightly

Firefox development starts with Firefox Nightly, which consists of the latest code packaged up every night for bleeding-edge testers. The first two protections are already available in Nightly — you can control both features from the Control Center menu (left-hand side of the address bar), where you’ll see a new “Content Blocking” section.

Here you can enable the blocking of slow-loading trackers or cross-site tracking through third-party cookies by clicking “Add Blocking…” next to the respective option. Check “Slow-Loading Trackers” to improve page load performance and/or check “Third-Party Cookies” and select “Trackers (recommended)” to block cross-site tracking cookies. Even in Nightly, these features still need to be enabled, but eventually they’ll be on by default. 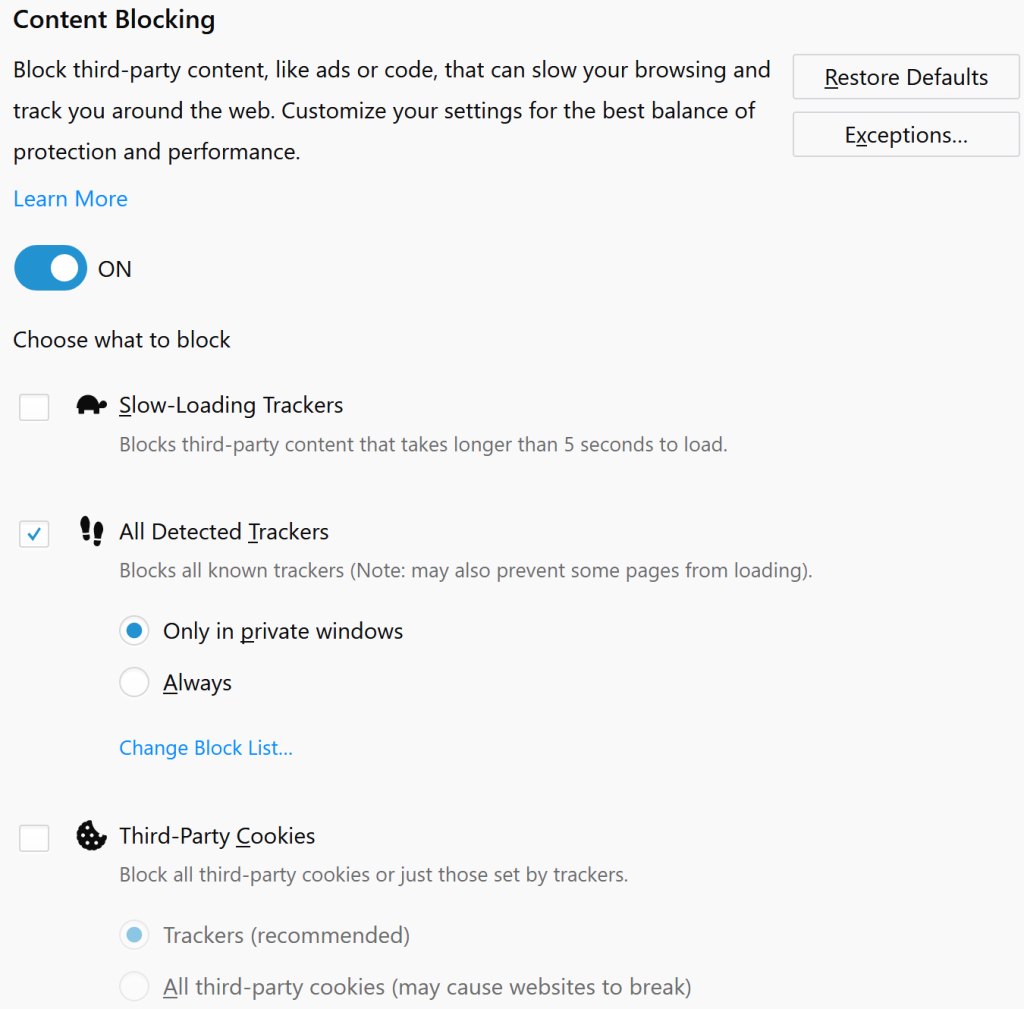 More details are available if you click on the Gear icon.

Tracking Protection in Firefox blocks website elements (ads, analytics trackers, and social share buttons) that could track you while you’re surfing the web. It’s almost like a built-in ad blocker, though it’s really closer to browser add-ons like Ghostery and Privacy Badger because ads that don’t track you are allowed through. The feature’s blocking list, which is based on the tracking protection rules laid out by the anti-tracking startup Disconnect, is published under the General Public License and available on GitHub.

It’s great for not just privacy, but performance as well:

Mozilla’s Tracking Protection technology is also available on other platforms, whether it’s called Turbo Mode on Fire TV, a separate privacy-based mobile browser called Firefox Focus, or simply a feature on Android and iOS. In fact, Firefox for iOS turned on tracking protection by default in April.

At the time, Firefox product lead Jeff Griffiths told VentureBeat that Mozilla had no plans to turn on Tracking Protection by default on the desktop. That’s apparently still true, but Firefox is finally going to block trackers by default — it will just give users more controls and options when it does.