Mozilla has been beta testing a revamped version of its Android Firefox app for over a month now, and today the company is rolling those updates into the official Firefox Android app. The app now sports a slick new interface, incredibly fast startup and browsing speeds, support for Adobe Flash, and new HTML5 features. 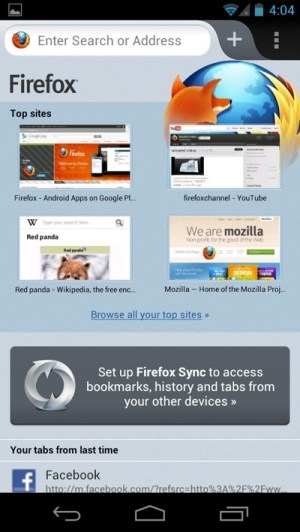 In short, it’ll give Google’s Chrome Android app (my favorite mobile web browser) a run for its money. Mozilla also has a big advantage: The new Firefox app works on any Android 2.2 phone or newer, while the Chrome beta app only works on Android 4.0 devices.

According to the latest Android version adoption statistics from Google, that gives the new Firefox a potential market of around 94 percent of Android devices, while Chrome only has 7 percent of the market running Android 4.0 or newer.

I’ve been testing out Mozilla’s latest Android Firefox beta for some time now on a Samsung Galaxy S III, and I’ve found it to be the best mobile browsing experience I’ve had yet. Taken together with Chrome, it’s clear that Android is now the most exacting mobile platform when it comes to web browsing innovation. (Apple’s Safari has also seen quite a few speed improvements in iOS 6, but that platform doesn’t allow for the sort of browsing engine competition we’re now seeing on Android.)

As advertised, the new Firefox app is blazing fast. It starts up almost instantaneously and pulled up mobile websites like the New York Times, CNN, and Yelp, almost as fast. It remained speedy for bandwidth-hogging websites meant for desktops, like Cracked.com, that feature large images and Flash videos. Browsing speed was about on-par with Google Chrome — it was faster in some instances, and slower in others — but I’m giving Firefox the edge since it works on so many more Android devices.

The new Android Firefox app isn’t just fast, it’s also gorgeous. When you first launch it, you’re presented with a start screen that features your most recently and frequently visited sites. There’s a new tab interface that’s a far leap beyond the previous Firefox app, and the mere act of scrolling through websites feels smoother. (Mozilla claims that it’s around twice as fast as Chrome when panning the mobile version of CNN.)

The Firefox app still sports the same tab synchronizing features of Mozilla’s other apps. The company also touts it as the first mobile browser to support Do Not Track, a feature that can prevent websites from tracking your online behavior.

Just as Firefox was the great savior from Internet Explorer for many Windows desktop users years ago, Mozilla’s new Firefox Android app could do the same for Google’s platform. The stock Android browser is slow, ugly, and featureless — which leaves the door wide open for Mozilla to provide something better. And while Google isn’t too concerned with improving the browsing experience for pre-Android 4.0 users, Mozilla has shown that even crummy Android phones can have halfway-decent browsing.

Check out just how fast the new Firefox app launches in the video below: