The Mozilla Foundation today released its inaugural Internet Health Report, which calls for the regulation of tech giants like Google, Amazon, and Facebook. The report debuts the same day as Facebook CEO Mark Zuckerberg is scheduled to testify before a gathering of two U.S. Senate committees, his first appearance before Congress.

Though tech giants in the U.S. and companies like Alibaba and Tencent in China have “helped billions realize the benefits of the internet,” the report calls for regulation of these players to mitagate monopolistic business practices that undermine “privacy, openness, and competition on the web.”

“They box out competitors, restricting innovation in the process,” the report reads. “As their capacity to make sense of massive amounts of data grows through advances in artificial intelligence and quantum computing, their powers are likely to advance into adjacent businesses through vertical integrations into hardware, software, infrastructure, automobiles, media, insurance, and more — unless we find a way to disrupt them or break them up.”

The Internet Health Report makes no attempt to give the internet an overall health score. Rather, it explores major issues that its authors believe have contributed to the relative health of online environments and examines how those trends impact people’s lives in the real world.

Fake news and propaganda like the kind peddled by the Internet Research Agency on Facebook and weak security for internet of things (IoT) devices were among unhealthy trends flagged by the report.

“Up to 30 billion devices will come online by 2020, including insecure webcams, baby monitors, and other devices that can be enslaved and collectively wielded as a weapon,” the report reads. “For every device with either no password or a bad one, the internet becomes a little more fragile and dangerous.”

Report authors cite the use of Mirai malware, which took control of a range of IoT devices and played a role in a DDoS attack on internet infrastructure organization Dyn last year, as an example of the security threat posed by unsecure IoT devices. To patch security shortcomings over time, the report recommends all manufacturers implement automatic security updates.

While the report finds censorship, energy use, and online harassment have gotten worse, there’s some good news when it comes to internet access, data encryption, and affordability. Among the positive findings, nearly 70 percent of Firefox web traffic today comes from HTTPS-encrypted web pages.

This trend has been helped along by the nonprofit organization Let’s Encrypt, as well as steps taken by Bing and Google search engines to index HTTPS by default and label HTTP web pages as insecure. 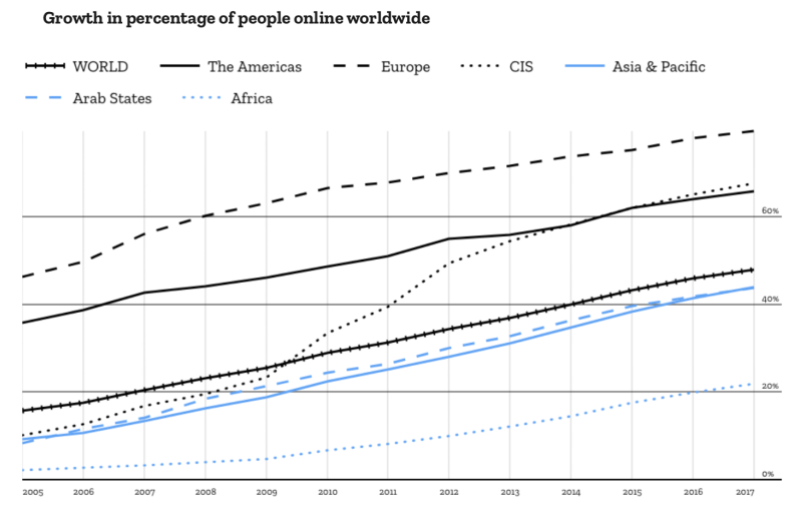 Overall, the report finds that the number of internet users is continuing to grow, with nearly half of the world’s population already online, but it notes that prices must continue to drop in order for the other half of the global population to come online.

“Considering that internet access is crucial to economic development, we urgently need affordability, accessibility, and quality to increase for the populations that need it most,” the report reads.

The Internet Health Report is an open source initiative compiled with assistance from Mozilla fellows, technologists, digital rights activists, and researchers. To read its full contents, visit internethealthreport.org. The initial Internet Health Report, called a prototype, was released in January 2017.