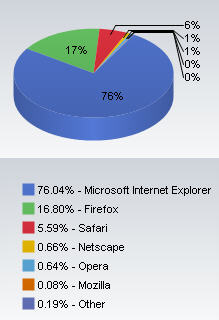 The move comes after steady growth of market share by Firefox, which now has about 17 percent, compared to Microsoft Internet Explorer’s 76 percent, according to NetApplications.

The gulf is still large, but Firefox’s share is up significantly from just a few percentage points four years ago. Some people believe the browser should be more popular than it is. Its open source underpinnings allow people to create extensions and add-ons that make it more useful.

Mitchell Baker, Mozilla’s chief executive, will step down and continue as chairman and an executive focused on Mozilla’s product development in the areas of “standards and interoperability,” and seeking ways to support the organization financially. Her blog post about the move is here.

Lilly will focus on overall product technology and execution, the company said in a statement. His blog post about the move is here. Among his comments:

We’ve got a lot to do in the coming years, starting with getting Firefox 3 out the door, and then swiftly followed up by our work in mobile and services. Mozilla2 will be a major step forward on the platform after that, not to mention our new experiments in Labs and the work that we’re doing to move the whole Web forward with Javascript 2, HTML 5 and other standards work.

Prior to Mozilla, Lilly founded Reactivity, an XML security company, and before that was senior scientist at Apple and as director of product design at Trilogy Software. Earlier he worked at HP and Sun, and has a bachelor’s and master’s in computer science from Stanford.

Update: John Markoff, of the NYTimes, has more details on the challenges facing Mozilla, which is a non-profit foundation with a for-profit subsidiary and must manage a host of volunteer developers even as it makes millions of dollars from a relationship with Google.