Mozilla has released its annual financial report for 2013, and the numbers hint as to why the organization signed a five-year deal with Yahoo, announced by the duo on November 19. Revenue increased just 1 percent, and the organization’s reliance on Google stayed flat at 90 percent.

For context, every time you input a query into Firefox’s search bar, Google makes a little bit of money from AdSense ads. A portion of that passes to Mozilla via a revenue sharing deal. 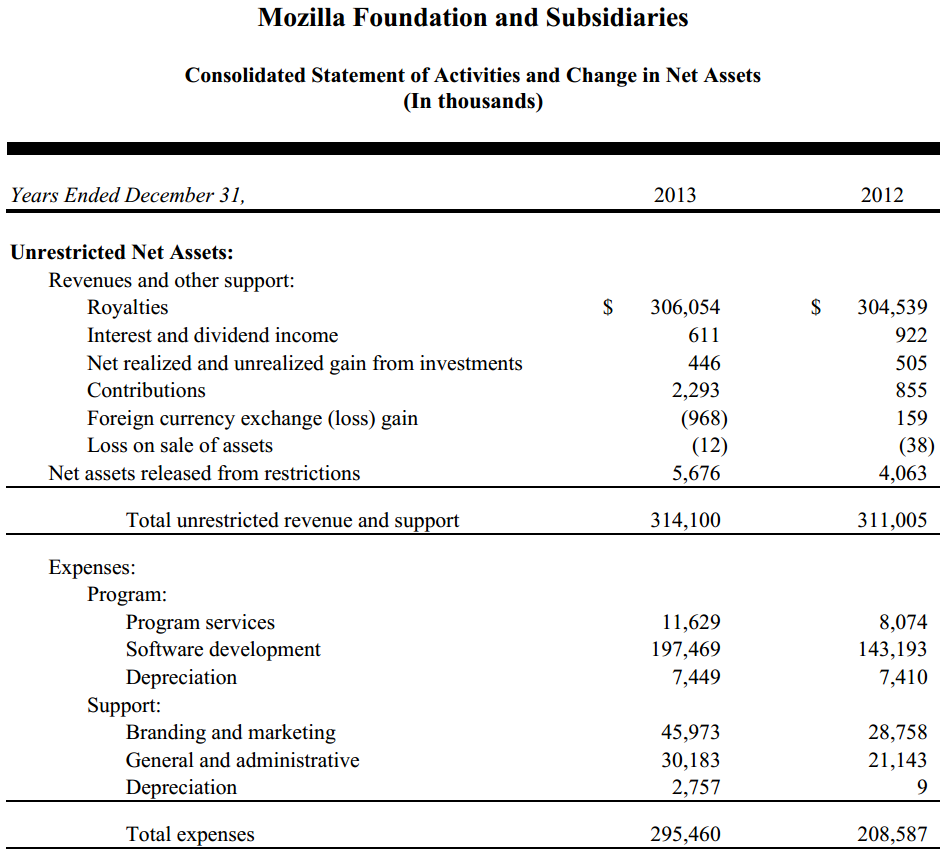 85 percent of Mozilla’s revenue came from Google in 2011, and that figure increased to 90 percent in 2012. While the 90 percent number remained for 2013, it’s still a massive proportion and shows Mozilla last year could not figure out a way to differentiate where its money comes from.

Basic math tells us Mozilla’s contract with Google brought in about $139 million in 2011, almost $280 million in 2012, and just over $282 million in 2013. We confirmed with Mozilla that 2013 will be the last full year it generates revenue mainly from Google, since Yahoo is becoming the default search engine for Firefox users in the U.S. However, the majority of 2014’s revenues will likely still come from Google.

“While Google will continue to be a search option for Firefox users, we are not renewing our commercial agreement,” Denelle Dixon-Thayer, SVP of Business and Legal Affairs at Mozilla, told VentureBeat. “2013 is the last full year for which we will record revenue from Google. Our agreement with Yahoo! begins taking effect in December.”

All of these numbers will likely change significantly in 2015. In addition to switching to Yahoo in the U.S., Mozilla has indicated that it is looking to strike new deals with more partners as well. Mozilla says Firefox now has more choice in search providers than any other browser, with 61 search providers preinstalled across 88 different language versions. In addition to Yahoo in the U.S., Yandex is becoming the new default in Russia, and Baidu will remain the default in China.

The source of search revenue in Firefox isn’t the only shift. The company has already started serving ads on Firefox’s new tab page in an attempt to find another potential revenue stream.

This year, Firefox turned 10. Mozilla made a big marketing push around the fact that it is the only major independent browser maker left:

Mozilla’s contract with Google was renewed many times, most recently until November 2014. Every time the contract was up for renewal, many began asking if Google would turn its back on Mozilla, which would make it very difficult for the organization to make ends meet.

Mozilla may now have five years of breathing room, but the organization is still under pressure to figure out other ways to make money. Yet that pressure has significantly lessened: It has more time now, and Yahoo is not a direct competitor in the browser space.

On November 20, Mozilla also started accepting donations in Bitcoin via the Coinbase platform. You can help reduce the organization’s reliance on Google and Yahoo yourself by going here.

Every November, Mozilla releases its financial report for the previous year. Some details in the 2014 report may provide an early hint at how the Yahoo deal is faring (as well as whether Bitcoin donations make an impact), but the 2015 figures will be particularly interesting, especially if Mozilla manages to strike new deals. What proportion of Mozilla’s revenues will come from Yahoo? Will it make more, or less, than it did with Google?

While we wait to see how the Mozilla and Yahoo deal fares, you can read Mozilla’s full report for 2013 here: Independent Auditors’ Report, Consolidated Financial Statements and Supplementary Information (PDF).