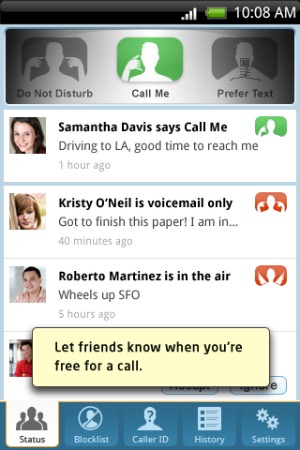 Mr. Number, an all-in-one mobile phone productivity service, announced today that it has reached its 2 millionth user and released a completely revamped version of  it application for iPhone and Android smartphones.

A version for BlackBerry smartphones will be available within two weeks, said the company.

Its new apps intend to bring the concept of status from instant messaging to mobile voice and text, thus allowing a user to let their friends know when they are free for a call, when a text is preferred, or when they are busy.

It also now has the added functionality of telling Mr. Number to send all a user’s calls to voicemail and then lets friends know when a they are free again.

The San Francisco-based startup already blocks calls and texts from people and companies that a user has specified they do not want to hear from again.It also sends alerts about who is calling when an unrecognizable number crops up.

The company says it does this by using crowd-sourced caller ID, spam detection and automated identification of telemarketers and other heavy dialers.

The chance to “go undercover,” as it were, is clearly paying off: Mr. Number has tens of thousands of customers who pay between $1.99 per month and $9.99 per month for Caller ID, depending on the platform. The company also has a dedicated reverse lookup app on iPhone that is one of the top 10 paid apps in its category. Free versions of the service include advertising.

Mr. Number used to be well-known startup Skydeck, which offered caller ID, human-written transcriptions from voicemail to text, and Web-based management. It also had a free, Google-powered transcription service for people unwilling to pay for the company’s human transcribers.

However, when Skydeck launched the caller ID service in October of 2009, it became the most popular feature, with 250,000 users to date. So, founder Jason Devitt renamed and refocused the company in June to leverage its obvious hit.

“It took us a year to reach 1 million users but only four months to get to 2 million,” said Devitt. “People tell their friends about us because we solve real problems, identifying mystery numbers and blocking spam calls and texts completely. The new version brings you more calls and texts from the people you actually want to hear from, by letting your friends know when you’re free to talk.”

Devitt will be a chairman of VentureBeat’s Mobile Summit next week.

Thus far, Skydeck has received one round of $4 million series A funding from Saban Ventures in 2008.