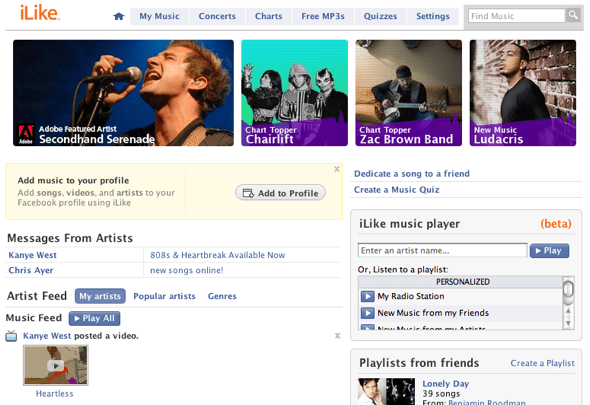 iLike, the music startup that’s especially big on Facebook, is on the lookout for an acquirer, according to MediaMemo. “Nothing imminent, nor active discussions,” a source close to the company tells me in response. That’s not an outright no, so probably something is going on — maybe a further round of funding? iLike is one of several online music services that have gained millions of users in the last several years by latching onto social networks; others include imeem and Project Playlist. Imeem is also reportedly looking for a buyer, or more funding.

Seattle-based iLike is comprised of its home site, iLike.com, new music site, GarageBand.com, plugins for iTunes and Windows Media Player, and a number of music applications on social networks, the largest of which is its collection of apps on Facebook. It has received more than $16 million in funding from investors, including ticket sales company Ticketmaster.

Web-based music services are great for generating usage but hard to monetize. iLike offers ads, links to digital song purchases on iTunes and Amazon, and directs people to buy concert tickets (through Ticketmaster). But it’s not clear how much money it’s making.

Facebook has designated iLike as one of two companies currently in its “Great Apps” program, which gives iLike special advantages like appearing more often in users’ news feeds, and allowing users to invite others to iLike applications. However, Facebook is also currently in talks with iLike and a range of competitors about doing a special deal to build streaming music more deeply into the social network.