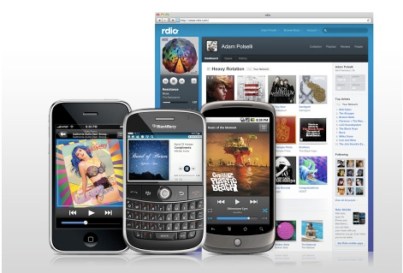 Social music service Rdio officially launched today into the crowded field of online music that includes providers like Pandora, Last.fm, iLike and imeem. (We covered the company a couple of months ago when it launched its invitation-only beta test.)

Rdio differentiates itself through its seamless playback experience. You can listen to music on your computer, pause it, and pick up where you left off on your phone, says COO Carter Adamson. The social aspect of the site lets users see what their friends are listening to and what they play most frequently, and friends can also exchange play lists.

It’s worth noting that while other sites like Pandora and Last.fm also allow list sharing, they fit more into the radio-type category, while Rdio is a sort of hybrid of internet radio and music player. Radio-type sites will play songs or song genres you like but don’t let you choose specific songs or a specific play order. But on Rdio, for example, you can listen to whole albums — such as from artist Ray Lamontagne — without interruption.

There are some experienced hands working on Rdio. It was founded, last year, by Janus Friis, Niklas Zennström, and their technology investment group Atomico. The are the people who co-founded Skype, Joost, and music-sharing site Kazaa.

The company has deals with major music labels like Sony Music Entertainment, EMI Music and Warner Music Group. Subscribers to the service get unlimited access to its circa 5 million songs for $4.99 on the desktop and $9.99 for the mobile service. A service like this could mark the end of buying songs and albums individually and, as such, has real potential to shake up the music industry.

When asked about the repercussions of a financial backlash for the artists and labels, since record sales are down already and the price of an Rdio subscription is so low, Rdio CEO Drew Larner said he believes that this is the way the music industry is evolving.

According to Adamson, the startup has managed to attract engineers from competitor Imeem, most notably, their VP of Engineering, Todd Berman. (Imeem, by the way, was acquired by MySpace in December of 2009 and has since steadily dropped to below 1M unique users.)