Sure, the music industry — including music startups — are having trouble coming up with significant online music business models, but recent rumors circulating about imeem‘s money problems appear to be exaggerated. The San Francisco company, which lets users create and share streaming song playlists, has been reportedly running out of money, especially because of how much it has to pay for music licensing deals it has with record labels. 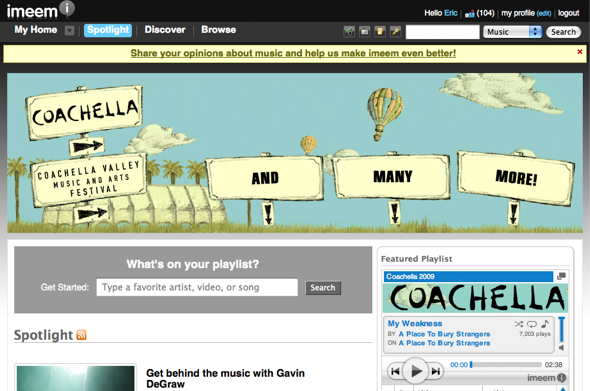 Imeem isn’t commenting on finances. It says it’s not profitable. So far, it’s been focused on advertising, but now it is also focusing on e-commerce revenue from things like digital song sales, ticket sales, and other non-advertising services. But I also hear the company’s advertising effort has been working to some degree. It is getting “much higher” rates for banner ads than MySpace Music and other competing web sites, one source says, because its users are focused on music, not on more general social networking features. Recession-driven advertiser cutbacks have hurt imeem, but the results so far of its direct sales team could mean more money down the road. Meanwhile, a new feature for letting users buy entire imeem playlists through iTunes has doubled the company’s iTunes revenue. Other features, like its VIP, freemium and ticket sales services are still too new to judge the results of.

But what about paying the bills now? Imeem was one of the first online music companies to work out a licensing deal with all four major record labels, and the terms are onerous, with the company possibly having to pay up to a penny to the labels for each song its millions of users stream. Rumors have been going around Silicon Valley and the music industry about immediate financial issues, with one being that they owe labels up to $30 million. Both the company and our sources say it is far less — in the single-digit millions. Imeem also periodically restructures its deals with the labels,

There are a truly impressive number of rumors going around about the company. One I’ve heard is that its valuation has fallen from what was (or still is?) “north of $200 million” to something far less; the company isn’t commenting on that. Another is that its investors, including its venture capitalists like Sequoia Capital as well as record labels, now own a very large portion of the company.

So either because of licensing alone or also equity, the labels hold power over imeem. More on what that might mean, from Wired:

When we asked, Warner Music Group would not comment on whether it would consider dropping the per-song rates it charges imeem. However, we’ve also heard indication that the labels could ultimately decide to let various online businesses perish under these on-demand rates, in the hope that eventually, one of them will be able to sustain the high on-demand music licensing rates they require regardless of the economy. For imeem, the day of reckoning could be approaching, although nobody we spoke to could envision imeem disappearing any time soon.

Imeem has up until this point had one of the most comprehensive streaming deals with labels; rivals like Project Playlist are still working to get approval from some of them. Which just goes to show that the music labels are providing the wrong mix of incentives here. They make fickle and costly licensing deals with only som companies, then tax them as they try to operate. The labels might be able to get more entrepreneurs invested in music startups again (yes, many have moved on) if they make a clear set of rules for licensing, then minimize or drop the tax while imeem and other music startups try to figure out their products and business models.

[Update: MediaMemo reports that imeem has reached a new agreement with some of the labels, including Universal Music Group but not Warner Music Group. TechCrunch has a good analysis of the state of the industry — which is that labels are more or less killing streaming music startups.]

[Update II: The company has recently had a recent management shakeup, with top business executives departing.