Two ex-Googlers are launching a brand-new advertising system today called MyLikes. The offering is designed to let publishers pick and choose their ads based on what they think their readers will respond to. The idea is to make advertising and marketing a more personal, conversational medium. A form of MyLikes has been in private beta for a while, but the product is being expanded and publicly launched today.

Here’s how it works: MyLikes signs up advertisers who want to run campaigns on their network. Publishers in the network then pick and choose the ones they want. If a publisher picks, say, Moo Cards (a current advertiser on MyLikes), they can do one of three things: write a tweet about it, write a blog post about it, or just add a caption to an ad. Any of these actions is called a “Like”.

By hand-tailoring these ads to best suit their site’s content and the interests of visitors to their site, publishers are upping the chances the ads will get clicked on — and that means they’re likely to make more money from those ads.

Once a publisher has created a “Like” within the MyLikes system, the ad, blog post or tweet gets reviewed by MyLikes to make sure it’s appropriate and relevant before it goes live. MyLikes includes notices on all Likes that make clear that they’re ads.

The way to think about MyLikes is as an affiliate marketing service, which allow publishers to recommend products they like and then gives them a cut whenever a sale is made from their referral, but with the metrics of an ad network: paying publishers by the click or the impression, rather than the sale. MyLikes lets you recommend products you like, but in a more publisher-friendly (you get paid even if you don’t directly make a sale) and customizable (you actually create the content of the ad, only the brand is restricted) way.

According to co-founder Bindu Reddy, the former project manager with Google’s AdWords, “One of the big things that really stuck us about AdWords is the low quality of ads you see, in terms of the content of the ad, the size of the ad, and the fact that the publisher doesn’t have any control over the ad.” People are more likely to click on an ad when they feel it’s a personal recommendation from a brand or person rather than a line of code slapped onto the site, she says.

The company has been testing its Likes system over several months in private beta as Likaholix, allowing people to create Likes and share them with their friends. But applying Likes to advertising is what’s launching this morning, as well as an expanded system that manages ads, helps create ads, and connects publishers and advertisers.

Publishers get paid, and advertisers charged, based on a system MyLikes has developed to track influence. Based on things like numbers of retweets and comments, the influence score determines how powerful an ad is likely to be. More clicks on content, sponsored or otherwise, means more influence, which means more payment for ads in the future.

For the first six months, MyLikes, still a company of two based in San Francisco, won’t be taking a cut of the revenue created by the ads in order to get more people to participate. But after that time it’ll take a cut, which according to Reddy will be under 10 percent. The company is also currently in the middle of raising funding. For those not in it for the money, MyLikes is partnering with a number of charities, and all revenue from Likes can be given to charity.

MyLikes’ success will hinge on creating a place where a broad enough base of advertisers come that there’s something for everyone, and on keeping track of the influence of publishers in a way that keeps advertisers and readers alike happy. If that happens, this may change how advertising on the Web works. 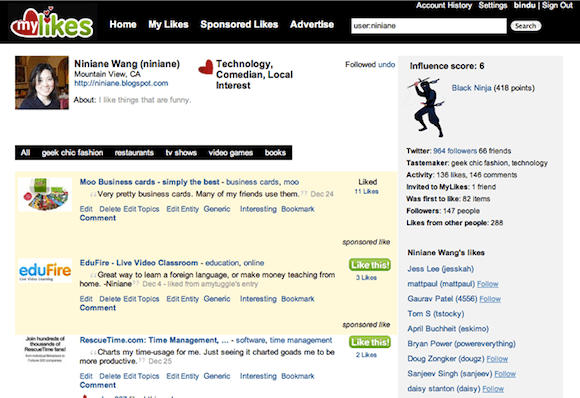