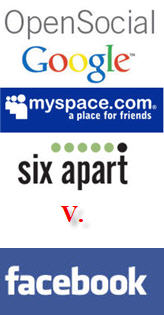 Meanwhile, SixApart, the blogging software company, has confirmed with VentureBeat that it is joining the ever-growing coalition.

The grouping, called OpenSocial (see our coverage here), is setting open standards for sharing user information across applications that run on social networks. It is supposed to go live today. The MySpace rumor first came from AlleyInsider, which said an announcement could come by the end of the day. We’ve confirmed it with a separate source, but a MySpace spokeswoman still tells us “no comment.”

The moves are significant. The Google-led effort is clearly a way to counter Facebook’s momentum in this area, and MySpace is the still the 800-pound gorilla of social networking. Developers have been flocking to Facebook’s platform to build applications, ever since Facebook told them they were free to build applications on its platform and make money. With MySpace in Google’s camp, this is shaping up to be quite a stand-off.

Here are the obvious reasons for this: It stunts some of Facebook’s incredible buzz of late, it is good for Google because it potentially gives it more access to MySpace data (though its speculation to say how much), and it allows MySpace not to have to deliver on its own open platform, and instead rely on Google’s (MySpace’s weakness is its product delivery).

Here’s the bad, though: It could mean turning over more data to Google, MySpace won’t really own the core platform, and it makes MySpace more dependent on Google. Moreover, it may not impact Facebook at all (some people are skeptical on the concept of the concept, and we’ve our own piece on its challenges).

Meanwhile, the coalition now shows 5x traffic, compared to Facebook. Conclusion: Facebook has Microsoft in its camp; it may also consider warming up with Yahoo. And Yahoo could use some help from Facebook.

Update: Myspace and Google have apparently been working on this for the past year. Developers will be able to start building applications for Myspace tonight, using OpenSocial.

Flixster has also released an application for Myspace using OpenSocial. 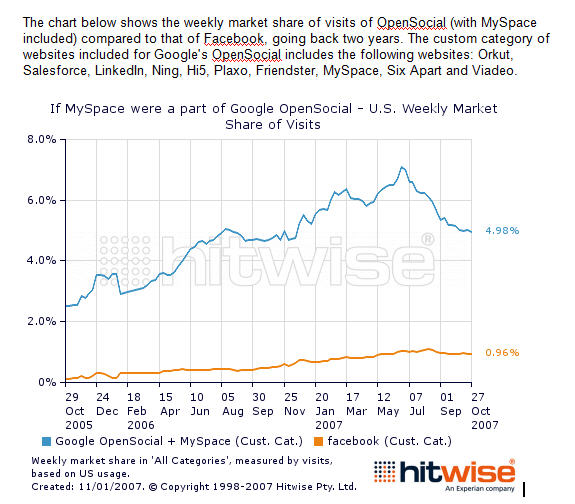