The much anticipated MySpace Music is geared to launch tonight, providing a platform for both major and independent labels and artists to promote and sell their music. The monetization potential of MySpace music is driving a great deal of interest to the new platform, as MySpace has always been considered a useful promotional platform for artists.

Despite tension between some indie labels and MySpace along with its major record label partners (the record labels have invested in MySpace Music, and some indie labels have reported that they’ve been unable to upload their music in recent weeks), MySpace representatives close to the matter have assured me that the goal for MySpace Music is to offer monetization and promotional services for all independent labels and musicians.

Though the MySpace Music launch has been delayed for some time now, the launch was officially slotted to be unveiled tonight. All four major record labels have entered an agreement with MySpace for the new music platform, including the latest holdout EMI. The Orchard, an independent media label, has also juped on board board with MySpace Music. Users will be able to stream full versions of songs for free, and add songs to their own custom playlists, which can remain private or be shared amongst friends. 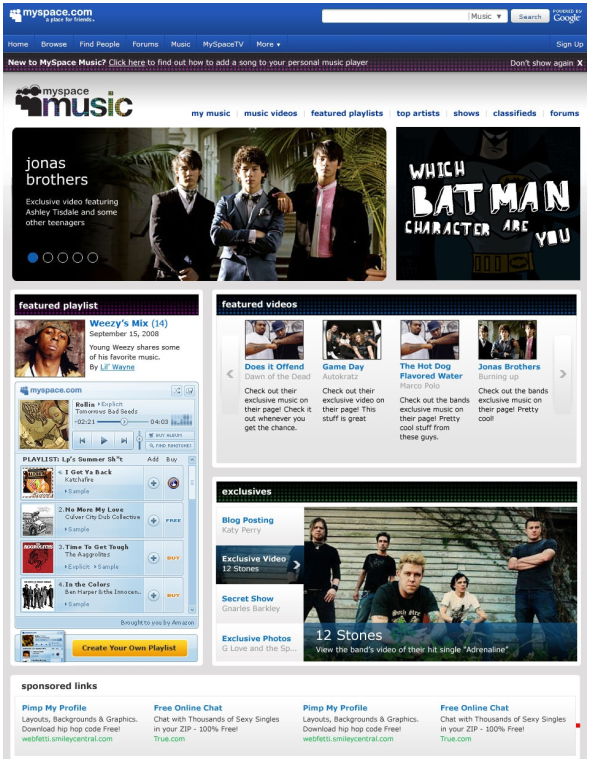 In touring the new MySpace Music platform with senior VP of product strategy Steve Pearman, I also learned that a large focus for MySpace Music is the social discovery aspect of music sharing and recommendation. This is an expected and pleasing portion of MySpace Music, as it helps divert attention away from the fact that MySpace Music is not an MP3 store — all purchases and downloads will be handled by Amazon.

It also looks to leverage MySpace’s social network, tapping into existing connections and providing the types of features and media-sharing we’ve all hoped MySpace would one day be able to do. The music recommendation engine will be based on user behavior, such as the number of users that grab a particular song from a given user’s playlist, in order to determine top songs, playlists, and influential users. Purchase data for Amazon MP3s will also be used for chart creations, to show top songs.

Given Amazon’s participation in the MySpace Music initiative, and especially its new application on the upcoming Google Android phone, the question of MySpace’s interest on the mobile front was also addressed by Pearman, who noted that there is a great deal of dedication by MySpace on the mobile end, though the relationships with the record labels, the technology behind mobile music and the the copyright laws for mobile music streaming have determined our current offerings. If it’s any consolation, your MySpace Music playlists will be available anywhere you can access your MySpace account, and that includes mobile devices. Streaming is not yet available, but ringtones are.

Will the recommendation engine, along with DRM-free MP3s and the cooperation of all major record labels, be enough to compete with the likes of Apple’s iTunes? There have been plenty of times when I was frustrated with the basic recommendation capabilities that iTunes offers, and quickly turned to a third-party application like Last.fm to find songs I may be interested in purchasing. Then again, I can purchase songs through iTunes with a click on Last.fm as well.

Nevertheless, wrapping these capabilities up in a music-oriented network like MySpace, where users can take advantage of existing friends, contends with iTunes, Last.fm, iLike, and a slew of social networks geared towards providing MP3 sales and recommendations. Perhaps this type of partnership is what Amazon needs to better compete with iTunes.