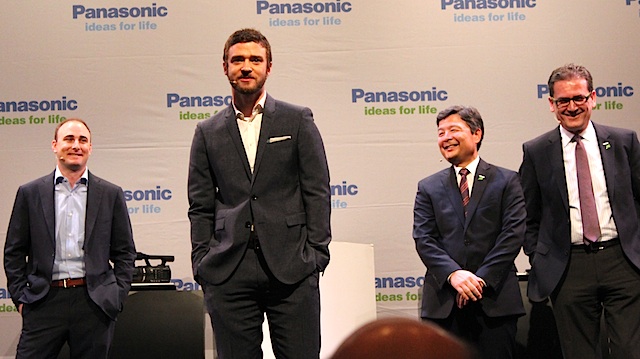 Panasonic’s big bet in 2012 is a social network that has been steadily losing cachet since 2008: Myspace.

Panasonic trotted out Justin Timberlake at the Consumer Electronics Show in Las Vegas today to try and bring sexy back to the pioneering website known for social networking, band promotion and really bad web design, all while making Panasonic TVs more integrated into your social life.

The partnership is potentially a reinvigorating shot in the arm for Myspace, whose revenues and membership numbers have been in steady decline for several years, as competing social networks Facebook and Twitter have surged ahead despite having a later start.

Myspace is staking its reinvention on Myspace TV, a service that lets you chat with friends, share shows and internet videos, and discover what’s popular among other Myspace TV viewers — all on your TV, while watching the shows you love.

“This is the evolution of one of our greatest inventions, the television,” said Timberlake, who started out in entertainment as a cast member of the Mickey Mouse Club, got famous as a member of boy band ‘N Sync and then went on to become a huge solo pop star in the early 2000s. Timberlake also invested an undisclosed amount in Myspace back in June 2011.

“MyspaceTV is an over-the-top social television service that brings an entirely new dimension to the TV experience you’re familiar with today,” said Tim Vanderhook, the chief executive of Myspace, onstage at Panasonic’s press conference. Vanderhook and his brother, Chris Vanderhook, are the founders of Specific Media, the company that acquired Myspace from News Corp. for $35 million in mid-2011. News Corp. had originally purchased Myspace from its founders in 2005 for $580 million.

The Myspace TV service will let you watch live TV while chatting with your friends on your laptop, tablet or the TV screen itself. In a commercial for the service, Panasonic showed a bunch of bros hanging out in separate rooms while watching a football game, chatting with each other and jumping into the air simultaneously when their team scored a touchdown.

Myspace TV works together with an app, the Myspace Companion App, which helps you discover videos you might want to watch, share them with your friends, and make them play on your TV with a single button press. For this app, Panasonic’s commercial showed some attractive young African Americans watching a hip-hop video from separate locations and sharing it with one another.

For Myspace, Panasonic’s endorsement is huge. It means that Myspace TV will be integrated into Panasonic Viera televisions, giving the social network a powerful leg up in its reinvention. It’s not just for Panasonic TVs, though.

“We’re trying to provide the social entertainment experience across all devices,” said Myspace chief operating officer Chris Vanderhook, in an interview with VentureBeat. He said that Specific Media has been developing an ad network and technology for sharing entertainment experiences for over a year, since well before its acquisition. Panasonic’s partnership is a huge endorsement, he said.

“Panasonic is a massive company. They hand-picked Myspace to deliver this product. It’s a great testament. They’ve seen the product, and they believe in what we can bring to the TV experience,” Chris Vanderhook said.

For Panasonic, it’s less clear that embracing a struggling social network so enthusiastically is a good move. In fact, the announcement was given premiere billing at the very end of the company’s CES press conference — and an exec even introduced that section of the conference with a “one more thing” comment that echoed Steve Jobs. For the “one more thing” to be Myspace was, well, a bit of a letdown.

And of course, a lot depends on whether Myspace’s dwindling but still sizable audience will follow the company’s new direction toward becoming a media service on all kinds of devices — a risk that Timberlake acknowledged.

“To the millions of Myspace users, we want to thank you for sticking with us in this shift,” said Timberlake.

Myspace TV will launch this spring.

Watch the Olympics in 3D

In other news, Panasonic said it would be providing 3D video recording equipment to NBC Universal so that company can broadcast the upcoming Olympic Games in 3D this summer. Olympic soccer star Brandi Chastain came on stage to help make the announcement. NBC will broadcast the opening and closing ceremonies, as well as hundreds of hours of sporting events, in both 3D and HD.

The Consumer Electronics Association estimates that 7 million 3D TVs and 9 million 3D Blu-ray players will ship by the end of 2012 — that’s about 20 percent of all TVs to be sold this year. Panasonic pointed out that this rate is five times faster than the uptake for HDTV when it was new.

In addition, 93 percent of Panasonic’s plasma TVs and 40 percent of its LCD TVs will be 3D-enabled in 2012.

The company is also providing tools to create 3D content. For instance, Panasonic’s Z-10000 video recorder captures broadcast-quality imagery in 2D and 3D. It also lets you capture 3D effects with objects as close as 18 inches, which is half the minimum distance previously required for 3D shots.

GM will be unveiling a new in-car electronics system called MyLink, developed in concert with Panasonic. It has a hands-free interface, smartphone integration and high-resolution touchscreen display.

And the company is enhancing a wide variety of products, from its Toughpad rugged tablet to its “Smart Viera” televisions, with enhanced internet connectivity options, integration with media services, and the like. 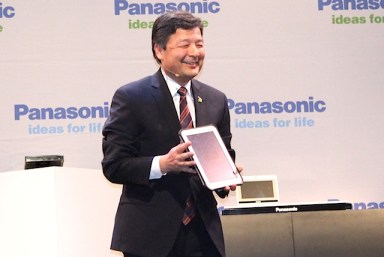 “Almost all of our 2012 lineup will be web-connected products,” said Shiro Kitajima, president of the consumer electronics division of Panasonic.

For example, Panasonic has updated its Toughpad line, which Kitajima showed off by dropping it onto the ground, where it bounced with an unnerving thump, but continued to work. He also showed the ability to move video from the tablet to a Panasonic TV simply by swiping up and “throwing” the video onto the big screen.

Skype will be integrated into many Panasonic televisions with an optional camera mounted on top of the TV set.

Ooyala will be able to deliver video content directly to Panasonic Viera televisions. Flixster will also be part of Smart Viera, giving people the ability to search and watch videos from the internet. The company is also partnering with Disney to deliver interactive digital comic books to TVs. 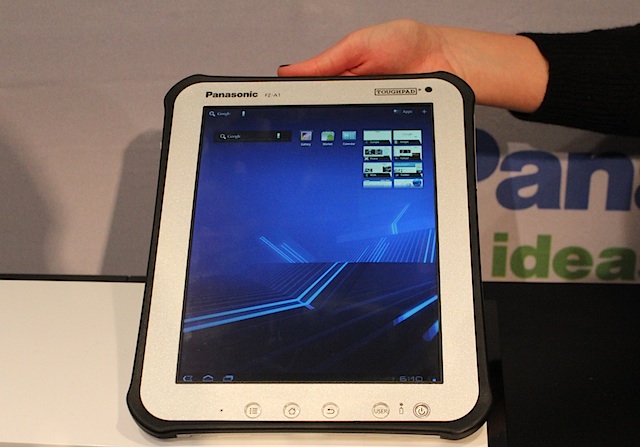