MyStrands, a service that provides recommendations, has launched a web site, Mystrands.tv, featuring clips of music videos and concert footage from YouTube.

While many companies offer ways of discovering new music, or new video, Mystrands is doing both. Given the many competitors in music discovery and in online video, Mystrands’ combination of services for music lovers could set it apart.

The Corvallis, Oregon company has previously launched a desktop-based application that you download to track what you listen to in iTunes or other desktop music players. The application uses the information it collects to recommend similar songs, as well as connects you with other users with similar tastes (our coverage here).

Most people use iTunes to listen to music, and YouTube to watch music videos. In fact, music video clips are already some of the most popular videos on YouTube. This service intends to funnel people from iTunes to Mystrands, not YouTube, by showing them the videos they want, more quickly.

If you’re a current Mystrands user, you can log into the site and immediately watch videos that the service is recommending to you in your own “music channel,” based on the data the company has already collected on your music preferences. If you’re a new user, you can check out videos without signing up — just search for your favorite artist and you’ll get a “channel” of their YouTube videos.

Other services, such as iLike, Last.fm, Filter and Simplify Media, also offer desktop applications that collect data about your preferences to help you find new music and connect with other users.

Mystrands has also been working hard on connecting digital music with real life. It offers “partyStrands,” a set of services for live venues, featuring a way to let party-goers recommend songs to DJs at a show using cell phone text messages.

The company raised $25 million in June, in a round led by 20-something Spanish media mogul Antonio Ansensio, on top of a previous $6 million in funding. 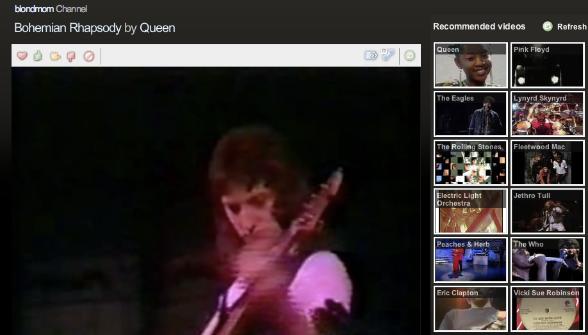