MyStrands, like Last.fm, offers a download that plugs into your media player of choice, tracks the songs you play, and recommends others. It builds an online profile that shows you your recently played songs, and links you to users who share your tastes. It even has a nearly identical “recently listened tracks” widget for social networks and blogs.

It would almost be a complete knockoff is in many ways like Last.fm, but it doesn’t have a general online radio station for recommended tracks; instead, it has an “Indie Radio,” station that features a limited set of songs and bands and offers a way for unknown musicians to get their music some attention.

With MyStrands, you get your recommendations in a few ways. First, you create an account and download the software. When you’re listening to a song, it will suggest others based on the listening habits of people who have liked similar songs. It will also create a “my recommendations” page in your profile, and let you browse the profiles of people who have recently played the song you’re playing, as well. From there, you can see other songs they’ve played. But you can’t play these songs, or hear songs like them. You can listen to 30 second previews, instead.

The recommendations offer good songs, but not necessarily similar ones. Listening to 2Pac, we got suggestions for David Bowie and Joan Baez thrown in with Naughty by Nature and Dr. Dre.

MyStrands has a couple of interesting features of its own. The best of these is the Playlist Builder, which mines your collection and automatically builds playlists based on a few seed tracks, artists, or albums. This is good if you have a massive library, as it allows you to rediscover music you already have but might never hear.

It also offers some its functionality for Symbian or Windows Mobile phones, allowing you, for example, to see the profiles of other people listening to the same song you are playing on your phone, add them as friends, and see their recommendations. There is also an interesting but “Partystrands” feature that lets you use SMS to vote on music at participating parties, bars, and clubs.

It’s likely that people won’t want more than one music application on their phones, and MyStrands’ mobile features don’t really stand up against products like Orb, which allows you to stream your entire music collection to your phone or Maestro (see our coverage here), which — assuming it can get around copyright issues — will soon let you stream your friends’ music as well.

With this significant infusion of capital, however, MyStrands now has the means to build something worthy of comparison to the company whose success it hopes to replicate. Execution is all that’s left.

Previous investors Debaque and Sequel also participated in this round, which brought the total invested to $31 million.

Update: SplashCast‘s Marshall Kirkpatrick pointed us to some elements of MyStrands that we’d missed, and we’ve since revised to reflect that. 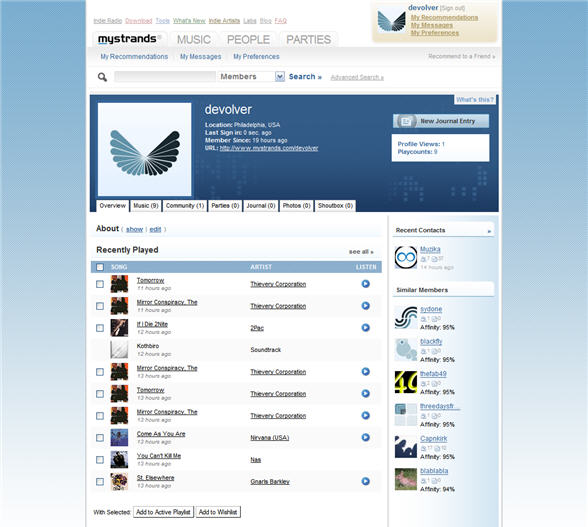