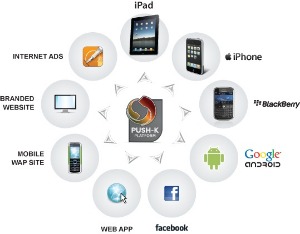 A user registers with Nadanu’s Push-K platform and then “drops coins,” which represent monetary donations from a donor’s credit card or Authorize.net, into a graphic designed to look like a traditional coin box for their favorite charity.

The eCharityBox is programmed to wait until it hits a predetermined amount; when “full,” it sends the donation on to the chosen charity.

This offering is the first of its kind to be available free outside of transaction costs, which Nadanu’s other three offerings currently charge.

Nadanu makes the majority of its money from its larger corporate clients, which enlist its tools to custom design large donation drives.

The company said it created this platform to mimic real life giving experiences in a virtual world for users and organizations.

“Historically the two options open to donors were either Paypal or Google Checkout, which are free but have no built-in tools or management, and donation platforms that either charge a monthly fee or a fee to transact on top of the credit card fees,” founder Getsy Fellig told VentureBeat. Nadanu said it is ready to take on all comers.

“We are changing that and open the space and technology to everyone. There is no reason a non-profit with a small budget should be left in the dark,” he said.

Other competitors in the $300 billion, 1.5 million charity space include BlackBaud, Network for Good, Razoo and First Giving.

Push-K also gives charities their own branded apps, with the needed functionality free or for a nominal monthly fee of $49.

For example, a church could set up a campaign with a Facebok app, iPhone app and a mobile website that allows giving secure donations.

New York-based Nadanu currently manages e-giving for over 500 charities, including organizations ranging from the Salvation Army, Jewish National Fund and the March of Dimes.

As the only company to offer an iPhone solution to accept donations not blocked by Apple, its platform also received the highest (known) single contribution on an iPhone —  $10,000 gift from a donor to a school.

The company has so far raised $500,000 in two rounds from friends and family but is actively searching for its first round of funding from institutional investors.