Namo Media today took the wraps off its new mobile native ad product, which it says will make it easier for any app publisher to offer well-designed in-line ads. 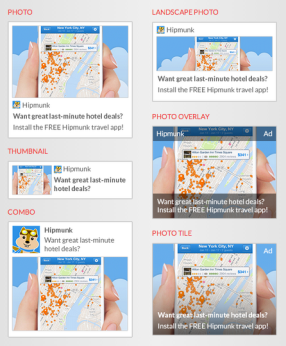 Above: Namo Media’s native ads are well-designed and fully-customizable.

To understand just how big of an opportunity this is, take a look at Facebook. A year ago the company said making money in mobile was its single biggest challenge. Since then, the company’s mobile ad efforts have pulled in over $1.5 billion — thanks in large part to the advertisements it placed in user streams.

Why streams? Namo Media CEO (and former Google product manager) Gabor Cselle says that advertising is a perfect fit for them. “Streams are natural way to show content on mobile, which makes them a good fit for advertising too,” he told VentureBeat.

Put another way, when advertisers and app publishers decided to bring banner ads over to mobile, they ignored the fact that banners really aren’t a great fit for the form factor. Banner ads are annoying, particularly on mobile screens, and they’re clicked accidentally a full third of the time. In other words, they’re bad for just about everyone — including advertisers and users.

Mobile native ads, on the other hand, fit well within the content that surrounds them, are unobtrusive, and users can easily scroll past them. That’s great news for advertisers, who are far more likely to pay top dollars for high-quality ad space over annoying 320×50-pixel banner ads. And that, in the end, means more money for app publishers.

Namo Media’s product is just starting out, but it’s one of an increasing number of companies looking to bring some sense back to mobile advertising. The company is joined in its pursuit by mobile ad company Airpush, which has teased its own, slightly different, take on mobile native advertising.