It’s a big win for the commercial space industry, as today NASA finally made a decision on which private companies it will charge with transporting its human crew to space on future missions.

Today the space agency announced new contracts worth $6.8 billion for Boeing and SpaceX to build spacecrafts, rockets, and the like for NASA’s commercial crew program. The companies will produce and manage components needed to transport a human crew to the International Space Station and (soon) beyond. It also has the added benefit of no longer forcing the U.S. to rely on the Russian space program to transport its crew to the ISS.

This is the first time in 40 years that a new mission involving a U.S.-built manned spacecraft for deep-space travel has been set into motion — something that should resonate with anyone who can’t wait for humanity to escape the planet.

Previously, NASA worked with private companies like SpaceX to transport (via the SpaceX Dragon ship) cargo to the ISS as well as to launch satellites beyond our atmosphere. 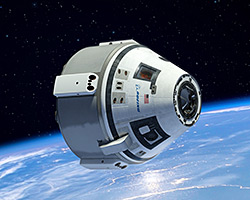 It’s likely that SpaceX will create a new manned version of the Dragon, while Boeing has already debuted its prototype CST-100 craft, which is capable of transporting up to seven passengers to low-Earth orbit.

The new commercial missions are scheduled to take place in 2017, which is when NASA’s current contract with Russia ends.