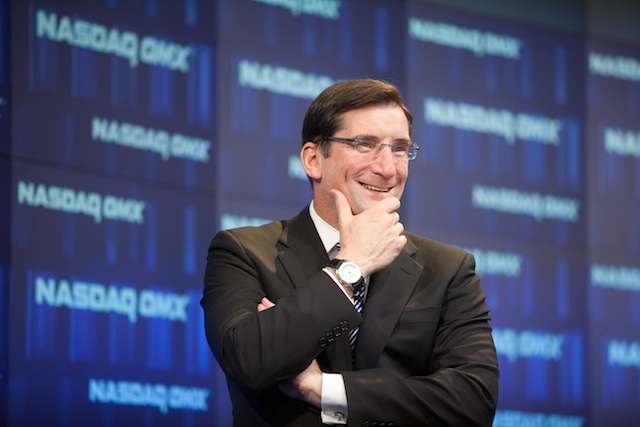 The NASDAQ stock exchange just posted a record week for initial public offerings, with companies including Zillow and Skullcandy pulling in roughly half a billion dollars in three days. Next week, the stock market will see seven separate IPOs.

Taking the weeks of July 18 and July 25 together, the NASDAQ expects these IPOs will raise a cumulative $1.43 billion.

And let’s not even get started about the upcoming Groupon IPO or the expected (but not yet confirmed) Facebook IPO, which could value the social network as high as $100 billion.

So are we in a bubble yet?

“We’re happy to have a great week this week, but I obviously don’t look at any one week with any degree of importance,” NASDAQ CEO Bob Greifeld told VentureBeat.

While the number of IPOs has been steadily increasing for three years, Greifeld said the overall picture is relatively balanced. “When you look at the valuations we’ve seen over the last three years, they reflect a sober reality,” he said. “In the aggregate, the pricing has been relatively fair.”

Greifeld echoed a point of view we’ve heard other entrepreneurs and VCs adopt recently: The companies going public now are older, more seasoned and have more revenues than the frothy IPO days at the height of the dot-com bubble in 2000-2001.

Sure, Zillow and Pandora may not be generating profits (although Zynga is quite profitable), but by and large, the companies going public now at least have revenue streams, paying customers and an established market. Contrast that to dot-com excesses such as Webvan and Boo.com, and the difference is clear.

Of course, the head of a stock exchange has as much interest in stoking market excitement as any entrepreneur or VC; it’s no surprise that he’s not pouring cold water on the fire.

If the regular IPO market doesn’t offer enough upside for you, NASDAQ is also in the process of launching a public market for earlier stage companies than the regular market allows. Called the BX Venture Market, the market will have the same corporate governance requirements (including SEC reporting) but with laxer financial requirements: Companies will only need a market value of $1 million (versus a $5 million minimum on the NASDAQ) and a minimum share price of $1 (versus $4 on the main market).

As a modern, digital stock market, the NASDAQ isn’t like the stock markets of old. Its heart is a massive datacenter capable of processing 1 million transactions per second, executing incoming buy or sell orders in microseconds, with a completely redundant fail-over to a second, identical datacenter in case of disaster.

“That’s not a kind of off-the-shelf capability,” Greifeld noted drily. “We have to push the boundaries of commercial computing technology in order to meet the requirements of running our market.”

In fact, Greifeld boasted his datacenter has the capability to process every single equity trade in the world today.

He’s not likely to get that chance, given that regulatory requirements around the world won’t soon allow all the world’s stock exchanges to merge into a single, massive digital market. But investors in NASDAQ companies can at least take heart that the stock exchange itself can withstand any trading volume, no matter how exuberant the market gets.