In fact, eMarketer’s recent projections show that U.S. native ad spend will reach more than $28 billion by 2018. But just how fast are native ads growing, and which verticals are getting the best results?

That’s the topic of a three-year study from Nativo (released today) that takes in data from over 600 brands. Nativo certainly has an interest in the findings, but the length of study, the sample size, and the results themselves are significant.

It is also the first time native ad spend has been broken down by vertical, and that offers both eye-opening results and a benchmark for the industry. Before we get into that, let’s look at the headline news.

Across all verticals, native ad spend has increased by 600 percent from 2014 to 2016. But that isn’t the most surprising result from the study.

“What was most surprising from the study is how within specific verticals, adoption between major competitive advertisers also highly varied,” Justin Choi, CEO of Nativo, told me. “For example, while we saw one or two major brands within a category embrace native early on as part of their broader digital strategy and experience clear successes, a competitive brand waited longer to invest in native strategies — years after the early adopters.”

“This goes to show how even within verticals, an advertiser’s affinity to explore new formats and channels can vary widely based on company culture, values, and other priorities that matter to the brand,” Choi said. “This helps explain why some categories with rapid growth driven by early adopters have slowed as other verticals ramped up quickly with higher overall adoption rates.”

The data shows clearly that the early adopters have had a rocky relationship with native ads. Automotive, tech B2B, entertainment, tech B2C, and finance & insurance, all early adopters of native advertising in 2014, saw their aggregate share of budget decline by 20 percent — from 57 percent in 2014 to 37 percent in 2016.

That could be due to the early adopters having had to go it alone before best practices were formed, while those that are coming late to the native ad party benefit from the knowledge pool. Whatever the reason, the converse trend is shown clearly for the other verticals — late adopters are flourishing. 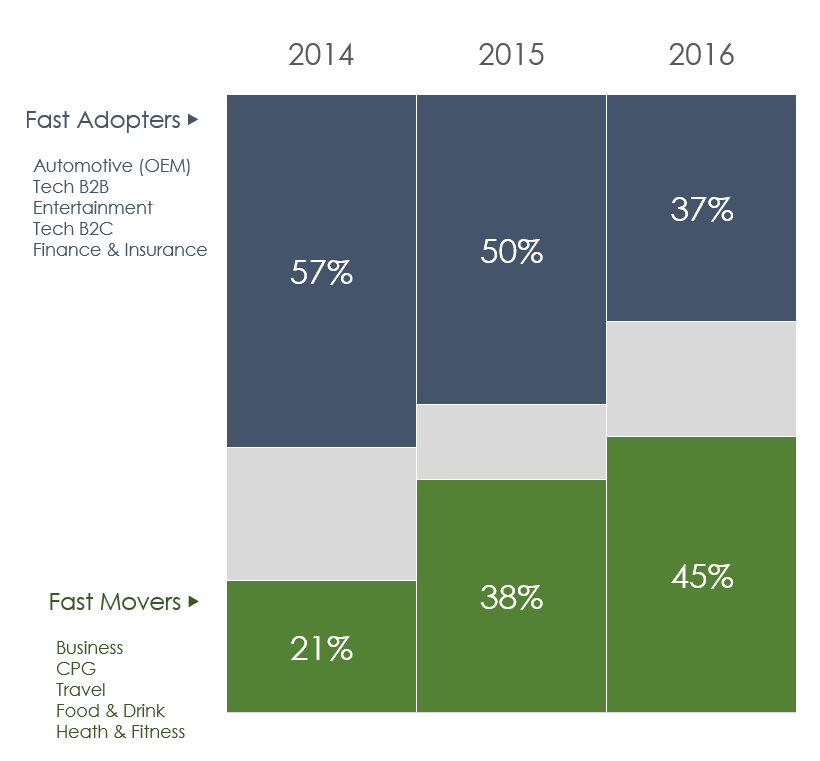 The study also shows which verticals are performing best. CPG, entertainment, travel, food & drink, and tech B2C are all seeing higher levels of engagement from native ads than other industries.

The report concentrates on native ads, but that is just one part of a multi-faceted marketing strategy. Are native advertising, sponsored content, and influencer marketing — seen as separate disciplines by many — starting to merge?

“For the foreseeable future, yes — each of them today maintains very distinct characteristics as separate marketing disciplines, but they are not mutually exclusive,” Choi said. “Native advertising continues to evolve into an umbrella term used to define native and non-native in-feed formats and high-impact content-based executions with well-established premium publishers. Influencers can create sponsored content and publish that content into native ad placements across different platforms to generate reach. So it’s easy to feel these disciplines are merging because to some extent — for reasons such as scale — they are increasingly becoming more fluid and fluent in conjunction with one another.”

Regarding the marketing stack required to manage these disciplines, the three techniques remain separate.

“From a technology perspective, we’ll see these initiatives increasingly housed together in more holistic tech stacks, but they remain distinct functions along the supply chain,” Choi said.

While native ads and content are growing rapidly, the likes of Facebook are pushing ahead with social ads as an alternative to an ever-reducing native reach. Other platforms still offer great native content options. We’ve seen brands getting a free ride from Snapchat, with native content results showing huge returns. What is the future for native content where social networks are under pressure to maximize revenues?

“It’s still the early days in native, and publishers are still wrestling with formats and monetization,” Choi said. “In the case of Facebook, it’s been their style to encourage adoption with free exposure with minimal restrictions then slowly roll out products and make adjustments based on where they see results. Snapchat will follow that trend, and brand exposure costs will increase over time. That said, good content will always be rewarded by consumers.”

The full report is available from Nativo from today.