The news about natural gas just keeps coming. Today, boutique investment bank Cascadia Capital predicted that oil will hit $100 per barrel next year, which will spur oil companies to expand their operations by buying up natural gas assets and companies.

As VentureBeat reported last week, analysts are forecasting that natural gas will move to beat out solar and wind, even though it’s a fossil fuel and not a renewable resource. It emits a lot less carbon than coal, and is likely to play a bigger role next year in federal energy policies and green entrepreneurship, according to consulting firm Kachan & Co.

Natural gas expansion looks like part of the Middle East’s efforts to go greener. The United Arab Emirates’ state-run Abu Dhabi Water and Electricity Authority plans to build several 500-megawatt natural gas power plants, but it will also be able to defer the construction thanks to energy efficiency gains promised by the implementation of Hara’s energy efficiency software. (The company announced the multi-year, multimillion-dollar deal today.)

And as we mentioned last week, consulting firm Black & Veatch reports that coal market share will be cut in half in the next 25 years because companies will retire coal-fired equipment rather than face the cost of complying with pending air quality regulations in 2015 and beyond. (See Black & Veatch’s projections below.) The ebbing tide of coal will be made up for by a doubling in natural gas, which is expected to rise from 21 percent of U.S. energy use in 2011 to 40 percent in 2035. And a recent Ernst & Young report found that low natural gas prices in the U.S. have made it tougher for solar and wind projects to win financing.

The good thing about natural gas is that there’s existing infrastructure for it, and hundreds of years left in the supply. And if some early-stage technology is able to scale up to commercial production, makers of renewable natural gas — that is, synthetic natural gas created from renewable feedstocks — could pose a big threat to solar and wind companies, according to Dallas Kachan, managing partner at Kachan & Co.

One hiccup in the rise of natural gas, though, could be environmental concerns. The problem with natural gas, as Black & Veatch points out, is that the hydraulic fracturing process of harvesting the natural gas has caused issues at the massive Marcellus Shale site in the northeast U.S. There have also been issues with the handling of wastewater and fluids used in the fracturing process — leading Pennsylvania authorities to fine natural gas companies and shut down some of the wells. 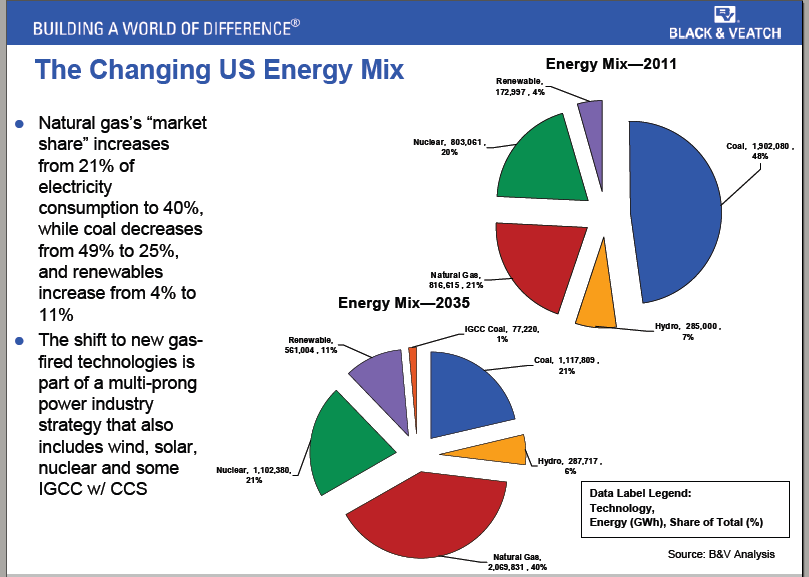