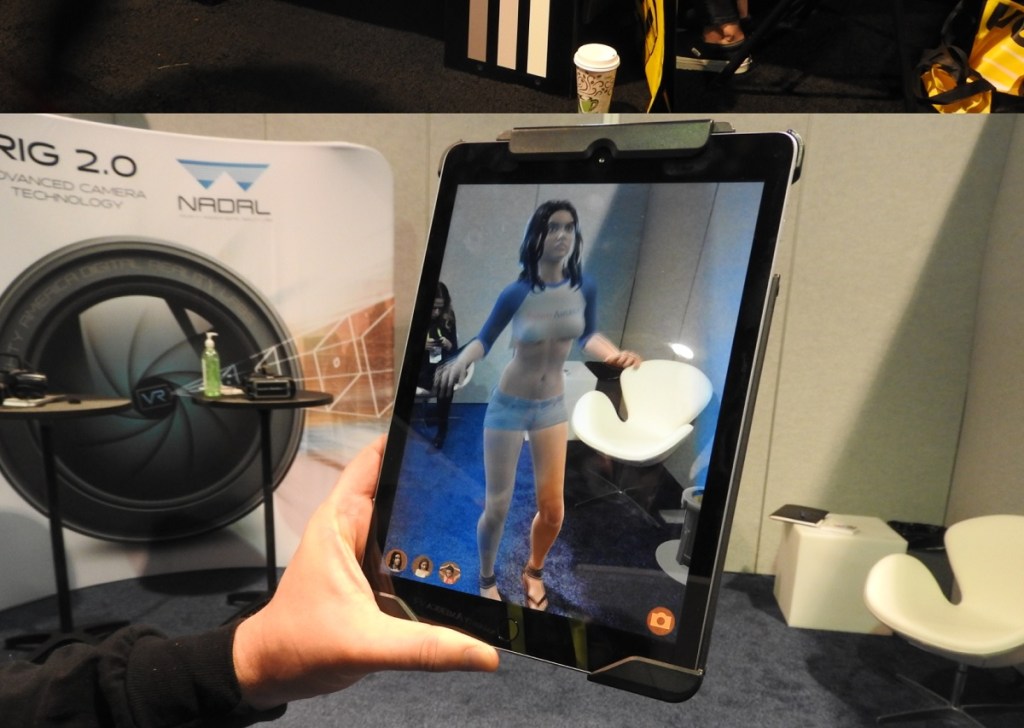 VB: This is year two at CES for you, right?

Ian Paul: Yeah, year two. This year, on the VR end of things we’re showing off alternate point of view, so from the perspective of the woman. We’re showing off how our directors are getting more comfortable with the technology, how they’re using different ways of shooting to immerse you in the content. We have a really funny Halloween scene. And then our new rig. We have a new rig. It’s high resolution, 5.6K. It’s a smaller form factor, so we’re able to do more with it.

We also have AR. We made no public announcement that this was coming, but we have the first prototype of our new AR app. It’s very basic. It’s also safe for work. We’re trying to get into the app stores.

VB: Is this built on ARkit or something like that?

Paul: Yeah. We can put it right there, maybe. And there she is. We have some different people. That’s not animated. But you can walk up to her, go around, like so. Again, that’s an early prototype. It’s a base for us to build on. You can be in the picture. There’s a social function, too. 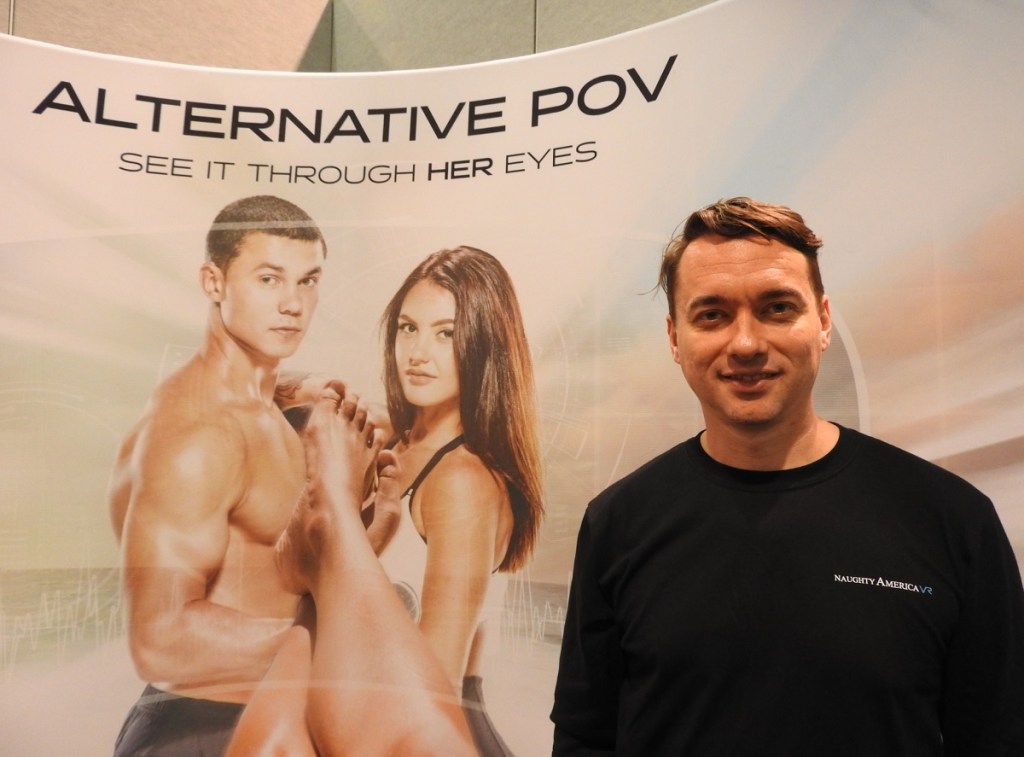 VB: Did that take much work for you guys?

Paul: Yeah, it did. It’s a pretty big project. The challenge is that this is computer-generated. It’s a volumetric scan. It’s not animated. But you can see there are some problems. If you look closely at her eyes, there are some issues. You can see if you go closer. When you do a scan of someone, there’s a lot of post work that you have to do to edit it, cut it up. It’s very expensive. We’re evaluating what the best strategies will be.

VB: What will you do with some of these? Will they become AR apps?

Paul: We haven’t figured out the model yet, but we’re thinking that we want to use this promotionally in a certain way. We want to give out the app for free, with that avatar included in it. It’s fun, because if you’re with your friends you can have her in the picture with you and do selfies. Then we’ll do microtransactions to buy other avatars of other stars. But with the whole craze in VR chat and other things, maybe this will go even further. Maybe we’ll end up in social VR territory with these same avatars. I don’t know. We’ll see.

VB: How long ago did that get started?

Paul: Last year at CES I told some different folks that this year we’d have some sort of AR prototype. We’ve been working through some of the logistical issues. We really put the pedal to the metal in the last couple of months to get this ready for the show.

VB: For this, do you have separate cameras shooting the same scene, basically?

Paul: No, we just — you can’t watch it both ways. It’s a scene just shot from the woman’s point of view. We get a lot of requests — what about something for women? Things like that. We’re trying to experiment.

VB: Did you have any more challenges as far as getting in to the show this year?

Paul: This year was much easier. I think they saw that we are a legitimate company that follows the rules. That’s helped us a lot. It’s tech. But we’re still in the back corner here. It kind of makes us seem even seedier than it needs to. We’re in some dark corner over here.

VB: But you’re not off in the side rooms.

Paul: No, that’s true. We have some improvement.

VB: Did anyone else in the industry come in this year?

Paul: No, I don’t think they’ve allowed anybody else. We have the lockdown on it, hopefully. Our main big competitors aren’t even doing VR. There are some smaller companies doing VR, but none of the big ones are. 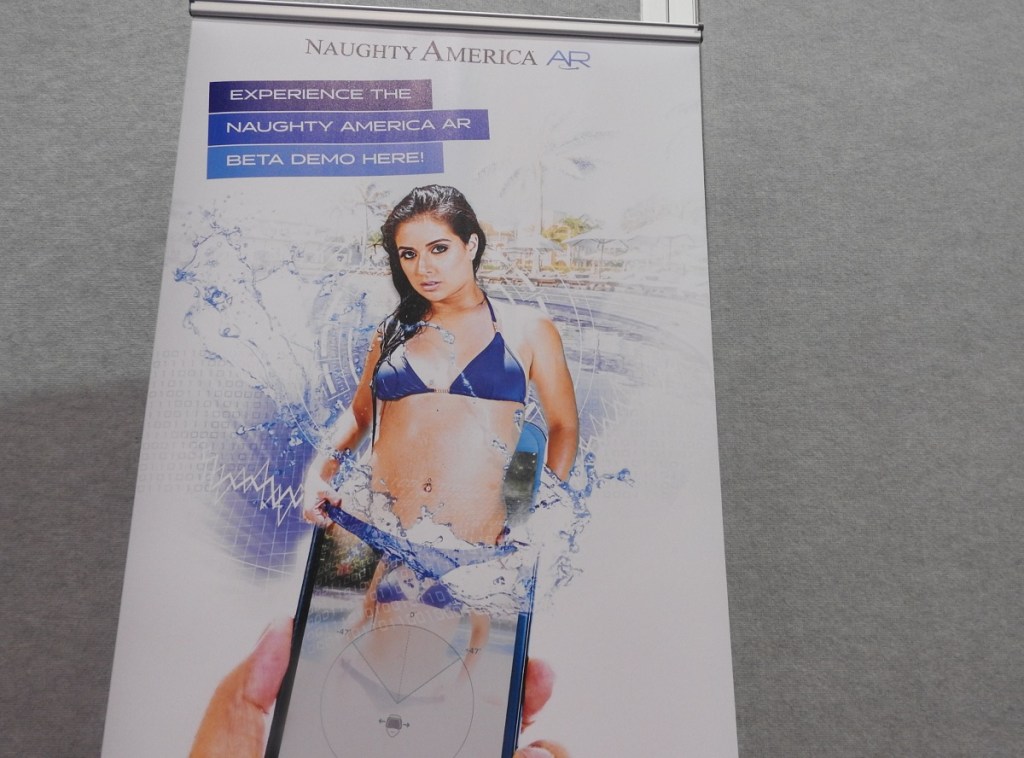 VB: They’d take a much smaller percentage and people would pay through blockchain currencies.

Paul: We’ve been accepting Bitcoin for a number of years. We’re big advocates for blockchain, very much involved in the blockchain community, for the reasons you described and for other reasons as well. There are innovative ways of distributing content, a lot of possibilities.

VB: Is protection of IP rights an issue?

Paul: Yeah. It’s harder to protect. But just making it easier for consumers to get the content they want. Today, whether you’re a musician or making a film, you’re sharing a lot of your proceeds not just with a payment processor, but with aggregators, like Amazon or iTunes or whatever it is. Now, theoretically, with blockchain, content creators can get paid directly by the consumer. That’s powerful.

VB: One of the game companies was saying, “We’re going to have a game store where we get all of the big games and only take five percent.” Everyone else takes 30 percent.

Paul: Exactly, and for what? For monopolizing traffic. It’s not necessary. That’s what blockchain does. It flattens out all these middlemen and redistributes that value to everyone else. It’s important.

VB: In some ways, is it also resistant to international and governmental pressures as well?

Paul: It can help. When you mention the international aspect, another big piece of the blockchain — not from a B-to-C perspective, but B-to-B. Having blockchain allows us to take content from other companies and pay them — normally you would license content, go through negotiations, pay up front for some other person’s content, bring it to your site. Maybe it performs well and maybe it doesn’t. But with blockchain you can pay that other content provider on a per-view basis, microtransaction style, and that way you don’t have to worry about, hey, they’re in another country. Is someone else going to rip them off? The payments just happen instantly over the blockchain. It reduces the risk of doing international content deals. 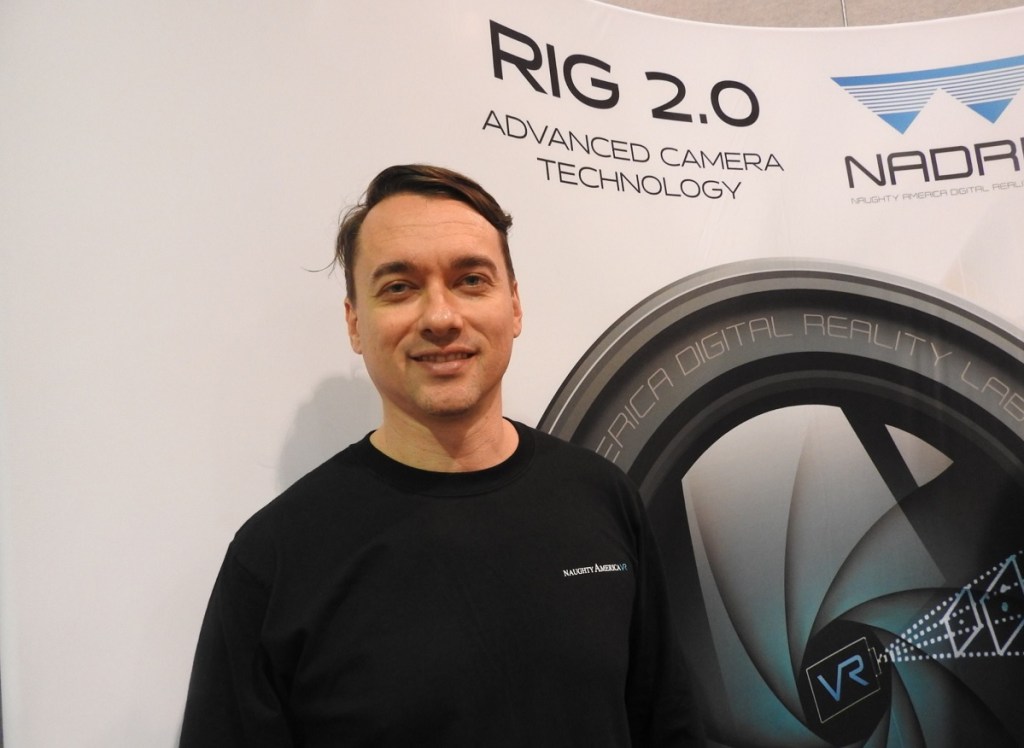 VB: The other problem people have mentioned is that you get paid by Apple in 60 days, something like that.

VB: How would you rate that as a technology that matters in your industry?

Paul: For our company, this year — with VR we have it well-defined. It’s humming along. I would say AR and blockchain are two of the biggest technologies we’re looking at right now. I can only speak for our company. I haven’t seen blockchain come up as a topic at the industry trade shows, but I will say that that’s what happened with VR. No one was talking about VR either until we had a product well under way. I think we’re a little ahead of the curve.

Paul: Oh, yeah. Tipping was the greatest innovation for live chat. Whoever came out with that was a genius.

VB: It spread across everything. Apparently the big thing in China is karaoke specialists now? Whoever’s the best in a particular city, they get tips by performing.

Paul: Someone wrote a Twitter bot that allows you to tip people on Twitter using cryptocurrency. I thought that was interesting.

VB: It seems like that would be a benefit to performers if they have a live chat component to their business.

Paul: We do have some products, both that exist and that are coming, that allow performers to monetize their time in different ways. We have products that allow people to buy the phone number of the performer. Of course, we use the same system Lyft and Uber use, where you’re not buying someone’s real phone number. You’re buying a proxy number. But you can text and call and pay by a per-text or per-minute rate. We hope to expand those tools to allow things like live performances and tipping.

VB: Any other interesting topics that are coming up for you?

Paul: The rig improvements that we’ve made are big. Like I say, it’s 5.6K, and smaller. The clarity is amazing.

Paul: 4K is finally, in the 2D world, becoming more popular now. It really was at a standstill for quite some time. I think it’s maybe the Black Fridays we’ve had year after year. Enough people are getting 4K TVs.

VR is still, as I say, the biggest niche since MILF. It hasn’t overtaken 2D and I don’t think that’s the way to look at it, in those terms. You use VR in certain situations. You use 2D in other situations. I do think the manufacturers have a challenge ahead of them in that they need to address the issue of headset fatigue. It doesn’t hurt our industry as badly, because you don’t necessarily use it for an extended period of time. But it hurts overall adoption of VR. After you use it for 20-30 minutes, it wears on you. It needs to become something you can wear all the time. That’s the challenge for the manufacturers.

VB: I did a story on a strip club once, that had a VR tour app of their location, reproducing it. I don’t know if that kind of thing has ever come up on the radar as an area that VR can go that other media can’t. You could take a complete 360 tour of this place, dancers and all.

Paul: We’ve talked about creating Naughty America itself, creating a world where things are going on you have some real life involved. Kind of like Grand Theft Auto does with different cities. We’ve toyed with the idea. It’s something we may embark on, starting with the avatars, getting the scans of the performers. We’re going to see where that goes.

I’ve seen some volumetric scans — one of them was a horse. It looked real. I mean, really real. That takes a lot of effort. You have to do the scan with a ton of cameras, each hooked up to their own video card. It’s an enormous amount of data, and after you gather it all you need to render it down into a smaller format that can be transmitted and shared and used in a Unity application. That rendering process is as much of an art as it is science right now. You saw some of the errors in our scans. That’s an example of what happens when it doesn’t render down correctly. Someone has to go back in there and manually touch all that stuff up. It’s very costly.

We’ve seen VR chat really pick up in recent weeks. I don’t know if you’ve seen any of those videos, but they’re quite entertaining. If you search YouTube for something like “Best of VR chat,” it’s just nuts. You have Sonic the Hedgehog talking with Ronald McDonald. You see hordes of cartoon characters mobbing a pretty girl. Just weird stuff going on there. We want to be part of that.