Navenio, an AI-powered platform designed to locate people in hospitals and other indoor locations where GPS is ineffective, has raised £9 million ($11 million) in a series A round of funding led by QBN Capital. The raise comes as health care systems around the world are feeling the pressure of the COVID-19 crisis. Among other things, this has meant variable staffing levels and a greater need to quickly deploy key personnel — such as cleaners and porters — where they are needed most.

While GPS is the established location technology for many applications, it’s not that useful for finding people or things in expansive buildings spread across multiple floors. Navenio is setting out to solve this problem through a combination of sensor fusion technology, smartphones, and basic building maps. The technology can be deployed in a number of ways — including on-device or in the cloud — and can be integrated into any third-party app or platform. Navenio also provides its own app to make its location engine more easily available.

Founded in 2015, Navenio is a spinout from the U.K.’s University of Oxford. Navenio CEO Tim Weil said having another $11 million in the bank will increase the company’s presence in its domestic U.K. market and help it expand into the U.S. and Asia, where it already has a “number of evolving partnerships.” Other investors in the company’s series A include G.K. Goh, Hostplus, BigPi Ventures, Oxford Investment Consultants, Oxford Sciences Innovation (OSI), IP Group, and the University of Oxford.

Navenio uses what is known as pedestrian dead reckoning (PDR) technology that leverages a smartphone’s built-in sensors, such as accelerometers and magnetometers, to determine a user’s movement, including relative distance and direction of travel. It then taps probabilistic map-matching algorithms to figure out the most likely previous and current location of a user — all the client has to provide is a multi-floor plan of the building.

The Navenio platform also learns the layout and traffic flow of a building by reading existing radio signals (e.g. Bluetooth, Wi-Fi) to create an ambient signal map, with each part of the building given a unique localization signature. If the environment changes — when radio signal-emitting devices or hotspots move around or are replaced, for example — Navenio identifies the change and remembers it for future reference. Since layouts can change frequently, automated signal-mapping is one way of ensuring Navenio always has an up-to-date map of a facility.

Above: Building a signal map with Navenio

The company is also developing crowdsourced auto-mapping technology, which it claims can physically map a building based purely on users’ movements, bypassing the need for floor plans. Navenio said it is piloting this as part of two projects in the U.K. While Navenio’s technology can be used in any large indoor environment, its entire focus is currently on health care systems, with 13 hospital sites in the U.K. under contract.

Although Navenio was already working with hospitals before the COVID-19 crisis, its technology could be particularly helpful during the pandemic. If a ward or waiting room needs to be urgently sterilized, for example, Navenio could help find the closest cleaner. Or it could locate the most suitable porter to transport equipment or patients. It can also be used to monitor vulnerable patients as they’re transported between locations. 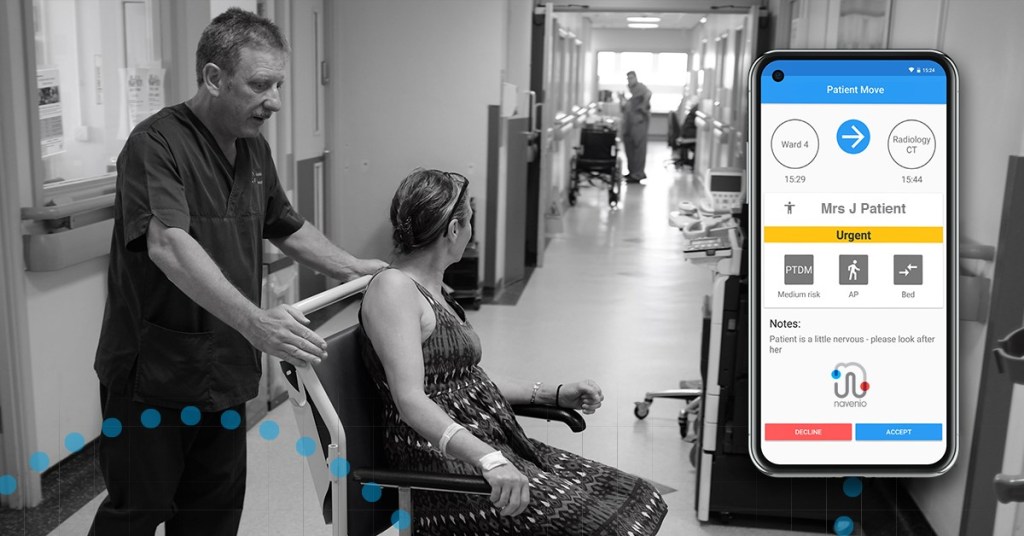 Navenio feeds into organizations’ broader task-management workflow — enabling visibility into where everyone is in real time and allowing managers to delegate jobs to the right people. A particular selling point is the ease with which the technology can be deployed — it doesn’t require dedicated infrastructure such as beacons or manual building surveys.