Esports club Navi (also known as Natus Vincere, or “born to win”), is launching a new gaming portal, or “metaverse,” with the help of blockchain-based game tech company DMarket.

Navi is an esports club based in Kyiv, Ukraine, and it is celebrating its 11th anniversary with the launch of NaviNation, which lets fans craft, sell, and buy digital assets and receive rewards and gifts from the team and partners. Rewards include club merchandise, gaming accessories, and even the opportunity to visit major championships together with their team in real life. The companies call this a metaverse, the universe of virtual worlds that are all interconnected, like in novels such as Snow Crash and Ready Player One.

That’s pretty heady science fiction, but lots of people are trying to create the metaverse now. That’s why we’re holding our own metaverse event, GamesBeat Summit: Into the Metaverse, on January 27 and January 28. Asked why they call it a metaverse, Navi said, “Put simply, the metaverse eliminates the boundaries of the real and virtual world. It looks something like this: while a gamer watches a stream, they receive a ‘virtual drop.’ These drops then can be turned into real-world items, like: headphones or a trip to The International. Moreover, gamers are free to trade digital goods for physical ones and vice versa.”

Navi fans will be able to use their Navi Avatars and Navi digital items in multiple games, cross-game and cross-platform.

The project is powered by the software application Drop, developed by Los Angeles-based DMarket. It took DMarket about eight months and around $1 million to develop this app. Using blockchain (the secure and transparent decentralized ledger) DMarket has made a decentralized, cross-game marketplace, which lets gamers freely trade and sell in-game assets, earning real value for those virtual items.

Drop features multiple mechanics for fans to create a new “metaverse” and grow it together with their gaming idols. This metaverse connects real and virtual worlds, gives each participant the opportunity to get closer to their team and get rewarded for their support. 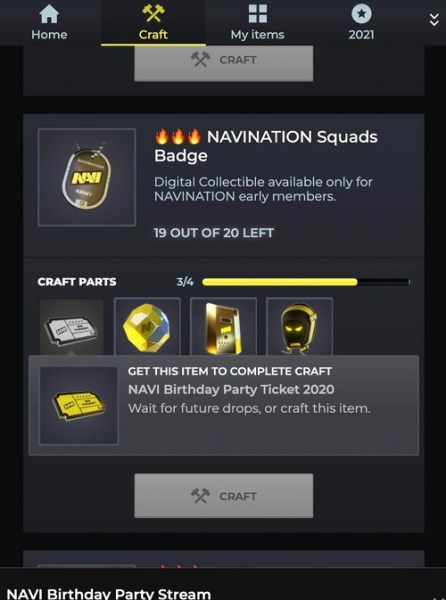 Above: DMarket is powering a store for Navi

Fans receive rewards for the time they commit to their favorite team in NaviNation. When watching video streams of Navi players, fans randomly receive drops, or in-stream rewards, that can be crafted into valuable goods and experiences such as unique digital badges, gaming mouse pads, club jerseys, meetups, and games with esports stars. The drops are also available for trading on dmarket.com.

The first live video including drops will be streamed via Twitch on Na’vi’s official anniversary, December 22. Closed beta testing of the NaviNation metaverse starts in January.

Na’Vi has more than 10 million fans and followers. With that fan base, the company said it’s the biggest esports brand in Eastern Europe and Russia. The company has won more than 248 trophies to date and grossed $11.4 million in prize money.

Vlad Panchenko, CEO of DMarket, said in an email to GamesBeat that the Drop product is much more complex and deep on the backend. Navi is Drop’s first customer.

“It involves brands, influencers and fans who now have the opportunity to be closer to their esports teams and even influence their favorite esports team behavior,” he said. “Our metaverse is about socialization, content and bringing your identity within different realities and dimensions.”

In June, DMarket raised $7.2 million from Almaz Capital, Fulgur Ventures, and Xsolla. Before that, the company raised $19 million in 2017. DMarket has more than 80 employees.