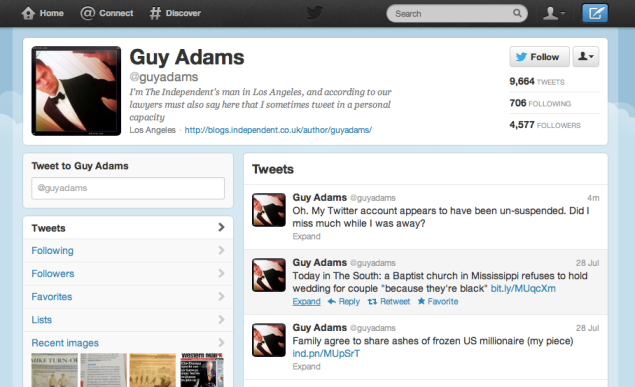 Wow, that was quick.

Guy Adams, the UK journalist whose unhappy tweets about NBC’s Olympics coverage in the U.S. got him banned from Twitter, is back.

The account suspension unleashed a tsunami of condemnation for the social news network, especially since Twitter had a close relationship with NBC for covering the Olympics. Especially since, it turns, Twitter contacted NBC about the alleged infringements of the network’s terms of service.

Guy Adams broke the news himself, on Twitter, saying:

This is good news. Someone at Twitter (and maybe NBC too) has come to their senses. Literally just a few moments before, I had published Twitter, you crossed the line, opining that …