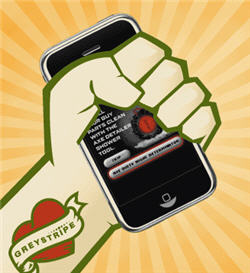 Greystripe, the mobile ad network known for its ads-games that invite users to play rather than just click, has drawn $2.5 million of  funding from Peacock Equity, a venture capital fund run by GE Capital and NBC Universal. Peacock’s investment rounds out Greystripe’s Series C to a total of $7.5 million. The other investors are Incubic Venture Fund, Monitor Ventures and Steamboat Ventures. Steamboat is an offshoot of Disney’s media empire, which includes ABC TV. That means Greystripe has investors connected to two of the big three broadcast networks — a real coup for an ad agency.

Greystripe claims two-thirds of its business comes from ads delivered to iPhone users. Greystripe’s special-sauce technology is a converter that reformats Flash ads into an interactive program format that the iPhone, which has no Flash player, can run. This allows Greystripe to serve interactive games into the ad space on iPhones, not just stationary ads or animations.

Greystripe CEO Michael Chang, previously a partner at Incubic, told the New York Times that New York-based Peacock’s investment would be used to expand Greystripe’s New York presence, open another office in Chicago, and grow its national sales team. Chang also claimed the company is on track to become profitable by the beginning of next year.