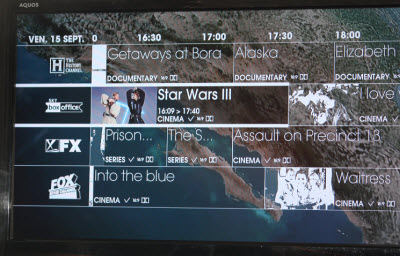 NDS is a London-based company no one has heard about. But it has 4,200 employees, a billion dollars a year in revenue, and has made its living over the past two decades providing technology to the TV industry. Among its contributions is conditional access, the security software that governs your cable or satellite TV subscriptions, and electronic program guides to your TV channels.

The company often noodles around with futuristic TV ideas that its partners are free to adopt under their own brand names. We recently got a tour of a bunch of these new ideas. They include using your iPod Touch or iPhone to control your TV, not merely by making an app but by integrating it closely with a set-top box. You can load recorded videos to the iPod and watch them on the go and then finish them at home. Using voice recognition, you can speak the name of a show into your phone and the program guide can pull up that show for you; that’s easier than typing something on a keyboard or remote. For now, this demo is a proof of concept.

“What we think might happen is the TV can become the companion to the device you carry,” said Nigel Smith, chief marketing officer at NDS. “The phone is a bridge between a more personal device and a more communal device.”

Another idea is Substitution Advertising. With this, the set-top box collects intelligent data about your viewing habits. (It doesn’t share private data). So when a show comes on, it can show you a relevant ad, just as Google does when you search for an item. In the demo, the set-top box can cache a couple of different versions of an ad for Kentucky Fried Chicken. Depending on whether you are a family or a single, it will show you a different ad. This targeted form of advertising should raise the amount of money an advertiser is willing to pay, and people are less likely to skip more relevant ads.

NDS’s software is used in 25 million digital video recorders and 116 million set-top boxes. It customers include Sky and DirecTV. Its owners are Permira and News Corp. These days, the company’s job is to help TV companies deal with the onset of digital TV and broadband. With too many channels, consumers now find the old cable TV interfaces and remote controls don’t work. 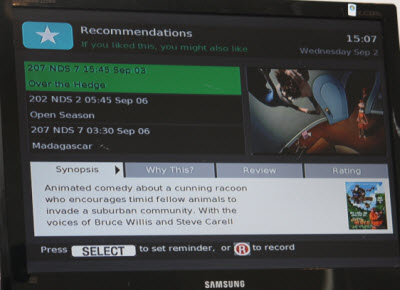 The company also has new interfaces for program guides. One is a see-through guide that lets you see the whole picture of the channel you are viewing. But the guide is transparently layered on top of the picture so you can choose a channel while watching the show in the background. It’s prettier than looking at a picture-in-picture. The interface can also be a bridge to social media such as Facebook or Twitter, much like the Yahoo Widget Engine. The interface can tap fancier graphics using Adobe Flash. 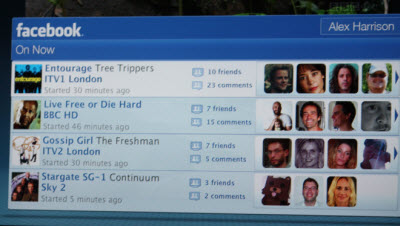 NDS is also getting ready for the day when we all watch shows in 3-D. It has created a prototype program guide that shows you graphics in 3-D. For instance, captions for foreign movies can show up 3-D text, but only in parts of the picture where there is room to see the words.