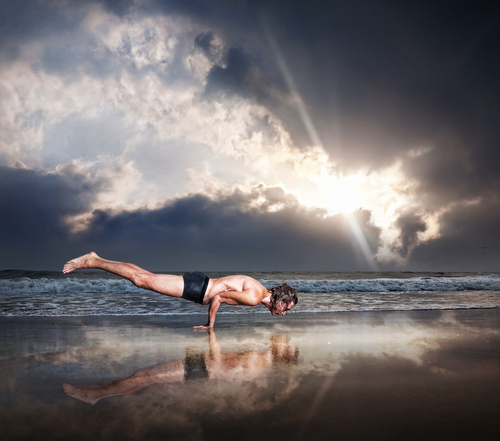 Dave Sevenoaks is upside down. Around him a group of software developers and startup founders are poised precariously on their elbows with their legs extended vertically into the air, in an advanced yoga posture sometimes called Feathered Peacock.

“I love doing hand stands and other inverted postures,” Sevenoaks says. “It makes me feel like a kid again.”

Sevenoaks is the instigator of Nerd Yoga, a weekly yoga class in the Volkskrantgebouw, which houses 300 startups and creative businesses in the hip district of East Amsterdam. He’s also the cofounder of mobile shopping startup Spaaza. “We try to focus on the upper body and back in Nerd Yoga,” explains Sevenoaks. “People who sit in front of computers all day tend to have really bad posture.”

I dropped into a Nerd Yoga class several months ago and encountered a typically unbendy group of coders struggling through a demanding session. Most were beginners. A week ago, the group’s physical prowess had dramatically improved with half of the class time devoted to difficult inverted postures like headstand and handstand.

Teacher Sinead Daly told me that the group was very ambitious and consequently has progressed faster than her other classes.

“Once they got into it, they really got into it,” she says. Sevenoaks points to the popularity of Reddit fitness (207,000 members) as a testament to geeks’ interest in health and fitness. “It’s primarily geeks, and they are completely obsessed, as nerds often get.”

So how did yoga mats become quietly de rigeur for developers in the Dutch capital?  At first glance yoga and technology seem like uneasy bedfellows. Yoga’s spiritual image appears at odds with the highly scientific mindset of the software developer, a mainly male group not noted for its athleticism.

James Bryan Graves runs the wildly popular Hackers and Founders Amsterdam and has been attending Nerd Yoga classes for six months. “The startup team I worked with in the U.S. was very much the stereotypical, overweight, frumpy dudes. After a successful release, we would have a pizza party, and that’s how we celebrated our success. We would reward our developers with crappy food,” Graves muses. “One guy had back surgery because his back had gotten so weak from doing development for 10 years that he literally couldn’t walk one day. Every time I go to yoga, I think about this particular individual and how I don’t want to end up like that.”

Nerd Yoga emphasizes the physical aspects of yoga, although Sevenoaks and Graves both acknowledge that they feel calmer and experience improved clarity of thought in their work after a class. Other startup yogis approach their practice in a different way.

Eleanor “Nell” Watson is the CEO of Poikos, which makes a 3D body measurement system. But in typical techie style, she was somewhat disconnected from her own body. “I’m a perceiver rather than a senser. I don’t see through my own two eyes but through my mind’s eye.”

Poikos participated in Startup Bootcamp Amsterdam‘s accelerator program this year. One of the startup mentors offered to teach a free weekly yoga session. [Full disclosure: That startup mentor was me].

“Yoga wasn’t something that I had really considered before,” she says. “I imagined getting into very strange positions, like an Indian version of Twister, but I found it very quiet, very peaceful, an idyll I could retreat to once a week to get away from the madness of the startup world.”

Watson also noticed that yoga, and in particular breathing exercises (pranayama), helped her to focus on one thing at a time rather than flicking through a relentlessly expanding to do list.

“I would be interested in seeing studies conducted on the physical and psychological well-being of anyone trying to start up a company. It’s a hell of a stress on the body,” Watson says. “It’s easy to lose your grip on stuff, physically and mentally. Yoga is a powerful way of re-centering oneself and putting oneself back in the body and also in the current situation that you are in and not in the situation that you are worrying about.”

Kneppers is a hardcore yogi. He gets up before 4am, has a cold shower and completes a demanding 2.5 hour Kundalini yoga practice. He no longer drinks alcohol or eats meat. Rockstart hosted yoga classes and startups in the program often began the day with wheatgrass shots but, ironically, this was not Knepper’s idea. “I was just being who I am and talking about yoga the way I do, and Don [his cofounder] said, ‘Why don’t we do this in Rockstart?'”

“Yoga helps you to carry more weight if you need to and get rid of the pain more easily afterwards,” Kneppers explains. “Ten years ago, running my first company, I would get completed immersed and have to drink myself out of it. Now I can fully engage and fully commit, but the moment I turn around and walk away, it’s out of my head. In most cases this is the founder’s first startup, and it’s not going to be their last. Yoga helps you to look at what you are doing from a distance, to have the intention to go in a specific direction without attaching yourself to the end result.”

When I asked Amsterdam’s startup yogis about the barriers to getting other techies involved in yoga they explained that yoga’s image was “hippy-dippy,” “too spiritual,” “not physical enough,” and, perhaps mostly damningly, “for grandmothers and mothers-to-be.”

Then there’s the early rising. “The best time to do yoga is early in the morning,” says Kneppers. “If you have been coding until 3 a.m. or 4 a.m., you don’t want to get up at 6 a.m. You may have to give up things that you have programmed yourself to think that you need, like working long hours.”

I’m a former software developer, and when I teach techies, the physical impact of sitting behind a keyboard all day is all too obvious: tight shoulders, rigid hips, back problems, and disordered breathing. Even more ominous for knowledge workers are the mental effects of these physical problems. The ancient yogis did not, in fact, believe in a separation between the mind and the body. They saw the mind as simply the most subtle aspect of the body and vice versa. So everything that happened in the body was considered to affect the mind. Science has started to confirm this whether it’s evidence that exercise makes you smarter or that Alzheimer’s is the ultimate food scare.

Larry Wall famously listed the three great virtues of a programmer as laziness, impatience, and hubris. If there’s one thing engineers love, it’s efficiency, and yoga can be a highly efficient way of conditioning body and mind. It can help you to cope with stress, think more clearly and generally become more light-hearted.