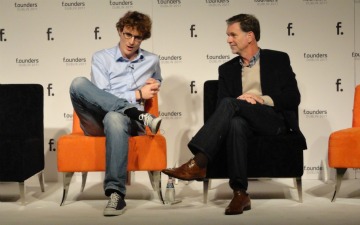 Netflix has been under pressure recently due to controversy over the company’s plans to split its DVD rental and streaming video businesses.

However, Netflix Chief Executive Reed Hastings seemed quite relaxed in a fireside chat at Dublin’s F.ounders conference on lessons he has learnt over the course of his business career.

“There’s a ton of lessons I’ve learnt over two companies,” said Hastings, whose first company was Unix software tools firm Pure Software, “The great thing about being a serial entrepreneur is that you get to make different mistakes the second time.”

One of Hastings’ most unusual sources of business wisdom was his marriage counsellor. At Pure Software, Hasting was programming at night and trying to be a CEO by day. Given that he also had a new baby, his family life suffered. “I was a bad husband and an absent Dad,” he explained. “My marriage counsellor became a great CEO coach and mentor. He forced me to admit that I cared more about the success of the business than the marriage. My wife could forgive me because I wasn’t a lying son of a bitch; I just had warped values. I learnt that total commitment to the truth, even when it is uncomfortable, is the right way to build a company.”

Every time a mistake was made at Pure Software, Hastings tried to implement a process to avoid repeating it. This was, in itself, a mistake. Over time the company “became less and less fun to work at”. He resolved to do things differently at Netflix. “As we built Netflix we set out to create a different kind of culture.” Instead of responding to increasing complexity with more process, Hastings wanted to give employees more freedom and responsibility. For example, Netflix shares financial data internally and trusts employees not to leak it. Hastings sees this as the opposite of Apple’s culture of secrecy.

Netflix started off with a standard vacation policy of two weeks per employee. One day an employee asked, “Why do you count how many days I work but not how many hours I work in the day?” As a result, Netflix employees no longer have a fixed limit of vacation days per year. This freedom is rarely abused. “We also don’t have a clothing policy, but nobody has come to work naked lately,” Hastings commented.

Finally, Hastings announced that Netflix will launch in the UK and Ireland early next year.