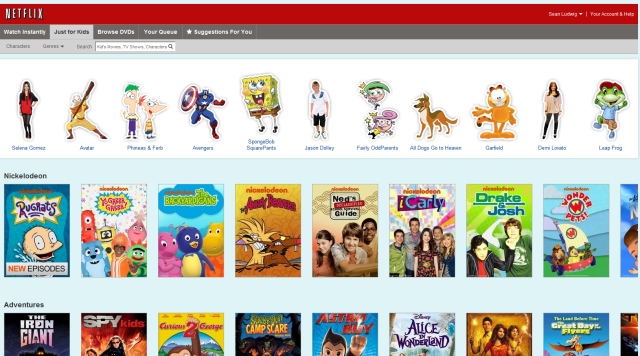 Netflix is testing out a new, simplified interface for its ‘Just for Kids’ section in a bid to make it easier for children to find shows to watch. It’s unclear how long the new features have been in place, but we can confirm some users have it.

Netflix did not respond to our queries about the new design asking if it was permanent.

The new interface (as seen above) has a row of clickable cartoon characters on top. When you select a character, the next page shows every episode associated with that character’s show. For example, if you click Aang from the show Avatar: The Last Airbender, you will be taken to a list of 54 episodes of the series. Individual episodes are represented by thumbnails and slider that shows how much of each episode has been watched. You can see the thumbnail view in this screenshot taken from my own account:

The design is very appealing and makes it easier to navigate quickly and select TV episodes. I wouldn’t be surprised if Netflix offered the episode thumbnail design in the near future for non-kids television shows as well.

The move to simplify the user interface follows news a few weeks ago that Netflix had an open position for a “Senior User Experience Designer for Kids & Family.” Based on the new changes, it’s possible Netflix has already hired a designer and put them to work.

Do your kids watch shows on Netflix? Are you comfortable letting them make their own show decisions?