Netflix investors have given the company quite a hard time as it continued to grow its subscriber base and expand into new territories, but for its first quarter of the year that doesn’t seem to be the case.

Netflix stock is currently trading at $213 per share (a 22 percent increase) in after hours trading. That’s good news for the company, which reported favorable metrics across the board for Q1 2013. This is the second time in a row that Netflix stock has rallied on good earnings, with the first happening after its Q4 2013 earnings.

Netflix added roughly 3 million new subscribers for the quarter, giving it a grand total of 36 million total subscribers. Its viewing hours for the streaming side of the business was over 4 billion hours — that’s over a billion hours per month.

It also helps that Netflix’s crop of original programming seems to be doing quite well, too. The company reported that House of Cards was an early hit despite its lead in weekend being the same time the Super Bowl. In today’s letter to investors, Netflix also pointed out that new series Hemlock Grove saw even higher viewership after its first weekend than House of Cards. Oh, and the clear popular original show of the bunch, Arrested Development’s new season, still has another month before it debuts.

What we’re seeing is Netflix proving that the high spending on original programming is apparently working, and if it can continue to keep viewing hours and subscriber totals up, it should keep investors pretty happy. (Or, at least they’ll be happy until Netflix announces its dipping into the red once again to expand into new markets.)

Below is a screenshot of the earnings summary. We’ll have more information about the results after today’s earnings call with investors. 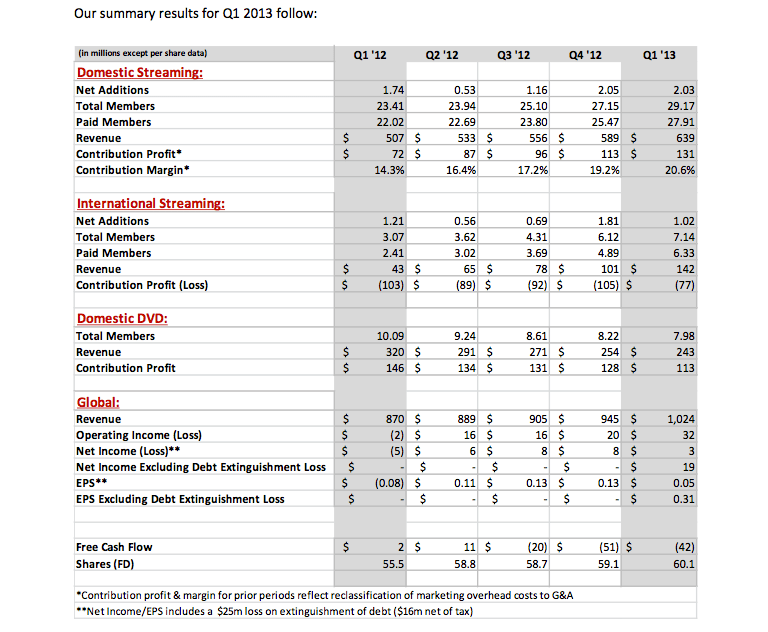