Network Next has developed a technology to reduce lag — or interaction delays that can ruin fast gameplay — for multiplayer online games, and now it is rolling it out around the world.

The Santa Monica, California-based company, which announced a seed round of $4.4 million back in January, has now rolled out its solution worldwide. The technology measures the lag in a particular player’s game every 10 seconds. If it finds the delay is too long, it looks for alternate paths to speed the packets over the internet to the right destination. This kind of optimizing allows it to create a faster connection for multiplayer online games. It works for PC, console, iOS, and Android games.

You can think of it as a fast lane on the internet. But players don’t have to pay for it. Rather, game developers and publishers can hire Network Next to fix a player’s connection, and the game developer pays for the cost. The game makers will do this because it means a player will have a much better experience playing the developer’s game, said Glenn Fiedler, the CEO of Network Next, in an interview with GamesBeat. 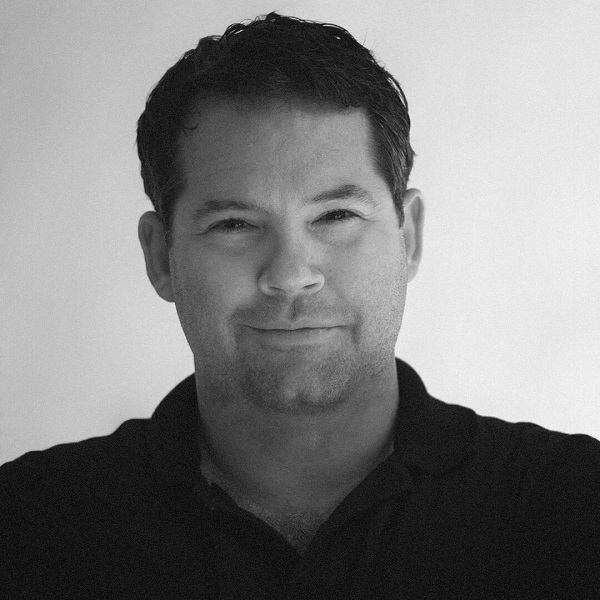 Above: Glenn Fiedler is CEO of Network Next.

“If you remember back in January, we actually used the ‘fast lane for the internet’ messaging,” Fiedler said. “And we realized that had a very negative connotation, because everybody had the idea that a fast lane is something that the player has to pay for. So we immediately switched around and kind of changed our messaging so that people understood that we’re really just a technology where game developers pay to sponsor the player so the player has a good experience.”

Some people assumed that Network Next was doing something that violates network neutrality, because the “fast lane” is a very loaded term in gaming. No one wants an internet service provider to charge more so you can get better internet traffic for a particular application. After all, you’re already paying your ISP a monthly fee.

This is why the company runs the bids anonymously. The bidders who can supply better traffic don’t know which application the user is running. The bidders only need to know which path the packets need to take and the bidders determine if they can do it at the right price.

Above: Network Next logo

“So in effect, we’re a solution for basically finding the best path possible, in a neutral way, so that the player gets the best experience. And we do that without violating network neutrality,” Fiedler said.

Fiedler describes the solution as a marketplace for premium network transit. The marketplace is made up of private network suppliers — CDNs, ISPs, enterprises, bare metal, and cloud providers — that have spent thousands of hours optimizing their network infrastructure and have excess capacity on their networks.

The company has several customers now, but it isn’t allowed to say who they are yet.

Game developers work with Network Next by specifying the performance they want for their game, then every ten seconds for each player, Network Next runs a bid in its marketplace to find the best route across supplier infrastructure between the game client and the datacenter where the game server is hosted. The marketplace enables suppliers to compete on performance and price to carry the game’s traffic, finding the best performance at the best price.

To ensure fair competition in the marketplace, suppliers bid anonymously — they have no access to which game’s traffic they are bidding to carry and may only compete on performance and price. Network Next makes money by taking a small transaction fee from successful bids. However, in cases where the public internet already provides good enough performance for a game, game traffic goes across the public internet and the developer does not pay. 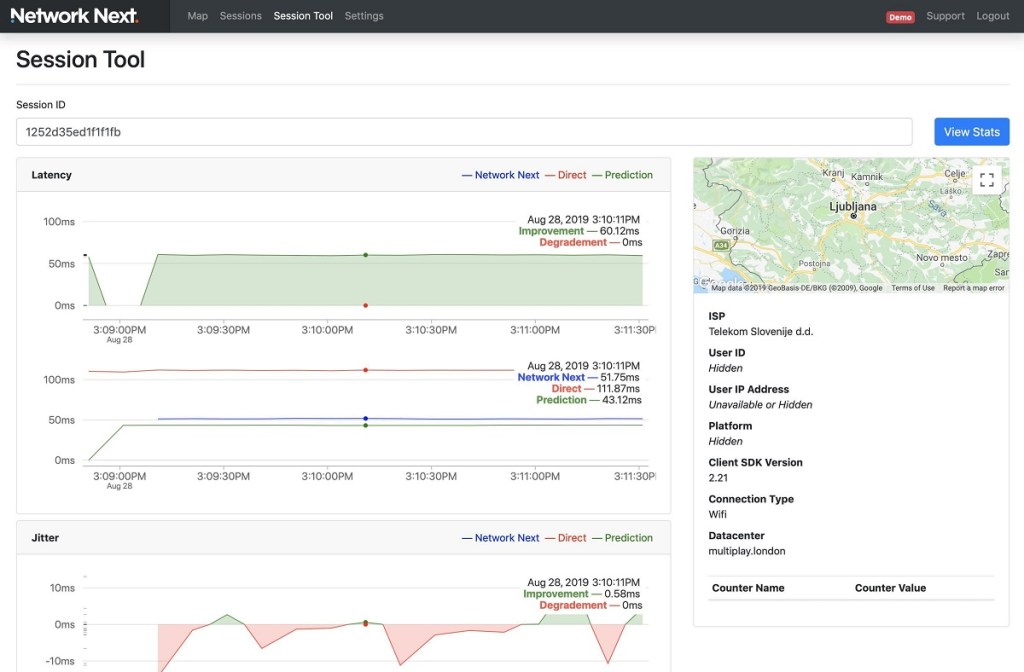 Above: Network Next is an internet traffic analyst.

The worldwide roll-out of its marketplace means that Network Next now has suppliers working for them on every continent except Antarctica. That means game developers can now deliver the latency-reducing, performance-enhancing benefits of Network Next’s solution to their players, no matter where they’re located in the world.

“What we realized is how we could control the traffic to give the player the best experience,” he said. “If we create this route optimization product, it’s almost like getting you to work fast. But then we realized, we need to work with private networks — infrastructure that large companies have already created, in order to accelerate the packets.”

He added, “So we came up with this idea of a marketplace. Every 10 seconds. For every player. We look at all the different ways to get from their house, the way the game server is running. And we run a bidding process with hundreds of different suppliers. And the winning bid carries the traffic for the next 10 seconds. That’s the marketplace. It’s basically like an internet. Except the network is competing to make your game faster.”

Players are getting massive latency reduction when they play a game that uses Network Next, the company said. It says you don’t have to do weird traffic routing, like when a gamer connecting from San Francisco to a server in Los Angeles has to do so through a connection in Chicago. Sometimes these “hairpin turns” don’t make sense, but it may turn out it is just cheaper to send traffic in that direction.

“We’re even accelerating traffic in mainland China,” Fiedler said. So on a daily basis, we have, you know, thousands and thousands of people worldwide from Trinidad & Tobago, Vladivostok, Alaska — all these people who are getting a very bad experience by default. And now these players have a good experience.”

To access the marketplace, developers integrate Network Next’s software development kit into a game. The SDK was recently open-sourced, so developers can add it to their codebases for free under the BSD 3-Clause open-source license. There are no fees for setup, installation, or integration. Console ports are available to studios who are registered PlayStation, Xbox, and Nintendo developers, and a Network Next plugin is available to ease integration for studios developing with Unreal Engine.

To see what sort of latency, jitter, or packet loss reductions a developer is achieving, Network Next also provides an analytics portal to developers. Developers can drill down into the data to see every players’ experience, even players not taking Network Next. Suppliers can also access their own version of the portal to see how their network is performing and to improve their own performance.

“Game developers are in the business of making their customers happy playing the game,” Fiedler said. “And how can a customer be happy if they’re having a bad experience playing online? If you are the player, you don’t want to pay extra for this service because you have already paid for the game. That’s why the developers pay.”

The company has figured out how to get paid for this service. Network Next finds an optimal route and adds a small price to it and charges that fee to the game developer. 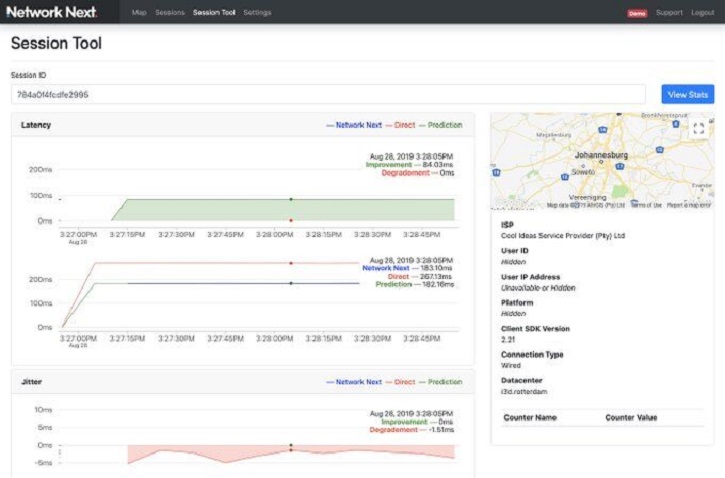 Above: Network Next measures lag.

Customers can hop on a portal and see the performance of their own architecture and run their own analytics. They can identify someone who had a bad experience and then see how to fix it. This way, customers can see that Network Next is actually delivering real results. The developer can also specify some requirements, such as very high speed for a first-person shooter or slower speeds for a thoughtful strategy game.

“It’s almost like a high-frequency trading platform to carry packets,” Fiedler said. “It’s like we were watching millions of different paths for packets to take across the internet in real time. And if the slightest thing changes, we are able to change the path less than 10 seconds later.”

Eventually, 5G wireless networking might improve internet speeds in some areas, and that will be another option for delivering packets in the most efficient way, Fiedler said.

“What we have here is a vision for a new internet,” Fiedler said. “What we’re ultimately creating is a network of networks.”