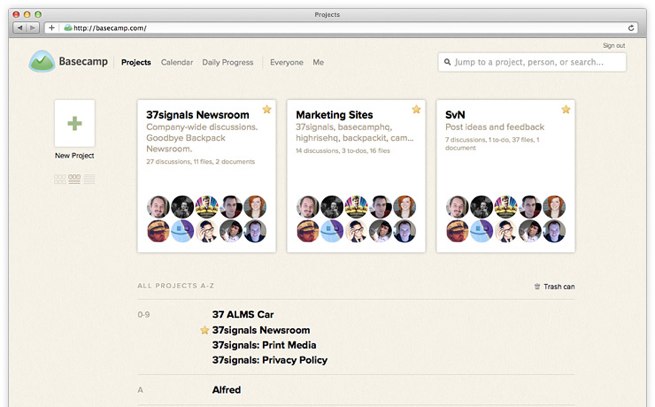 The app that first made online project management cool back in 2004 has been entirely reworked to better suit the modern needs of today’s project collaborators.

Basecamp, the eight year-old project management application from 37signals, has received a dramatic redesign Tuesday and is intended to emulate the simplicity of using paper.

The new version sports a radical new look with fresh upgrades such as document autosave, file drag-and-drop, and a history feature that includes a full audit log. The tool is also said to be faster than ever and newly tailored to fit short projects.

“The new Basecamp features an entirely new innovative interface. All new code. Brand new tech. And some serious hardware backing it all up,” 37signals CEO and co-founder Jason Fried said in an announcement.

Basecamp, the flagship (and first) product from 37signals, is one of the few online project management tools to acheive brand name recognition across multiple industries. To date, more than 8 million projects have managed by way of Basecamp.

That’s not to say the tool is the best of breed. Many startups have tried to beat Basecamp with better, simpler, or flashier features and interfaces. The task of acquiring customers with a beloved veteran like Basecamp owning the market, however, has proved near impossible for most. But a handful of companies such as Huddle and Yammer are attracting attention for more flexible, real-time collaboration tools, making a Basecamp do-over a necessary step to stay relevant.

We’ve yet to do a deep dive into the new product, but initial feedback from customers is overwhelming positive. “As far as second first impressions, it’s a very memorable one,” commenter Justin Kropp said, echoing the statements of others. “The entire experience feels light, easy, and inviting. Every aspect feels more considered than the previous, allowing the UI to make room for what I suspect will be an increase in productive collaboration.”

Some people have called the loss of time-tracking a major misstep, however. “There’s no way I could do without time-tracking within my projects. It’s like a mirage in the desert,” Bryan Martin said. “So close, but can’t get to it.”

The new Basecamp is available today and new users can try it out for free in an unlimited 45-day trial. Pricing then starts at $20 a month. One important thing to note: 37signals has done away with its free tier, meaning once the trial is over, the $20 per month Basic plan is required for on-going access to projects — and that’s another decision that some customers are not too keen on.