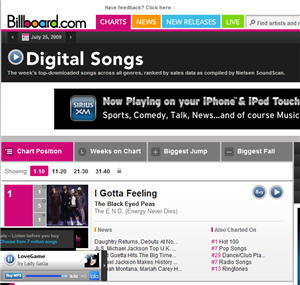 Biggest news for non-geeks today: Billboard has made its famous charts available online without requiring a subscription. The 115-year-old publication has turned its website into a music portal where you can listen to full tracks without signing up. Every single act that’s ever made Billboard’s charts will soon have its own page on the site, the company told USA Today.

It’s as if Billboard’s management read Chris Anderson’s Free and decided to give it a shot. Billboard is giving away its core product, the charts, in order to lure music fans to buy songs and concert tickets through billboard.com.

“You can go to this week’s Hot 100 chart and listen to every song on it,” publisher Howard Appelbaum told USA Today. “Or you can plug in any date you want and we’ll show you all the charts and you’ll be able to create a playlist.” An embedded player, shown in the screenshot above, floats atop the site’s pages. I listened to Lady Gaga’s “Lovegame” while exploring charts. Billboard’s click-to-play charts have the most brazen, yet tasteful “Buy” button I’ve ever seen. But purchasing isn’t embedded into Billboard’s user interface. When you click Buy, you’re sent off to Lala to consummate the sale.

There are disappointments, though. The worst is that the site’s layout is sloppy, with elements often ending up stacked one on top of the other. After launching a player within the page, I couldn’t reach the play button for the Black Eyed Peas’ #1 track “I Gotta Feeling” atop Billboard’s singles chart. I managed to figure out a way to get to it, but isn’t part of the joy of Black Eyed Peas that you shouldn’t have to think?