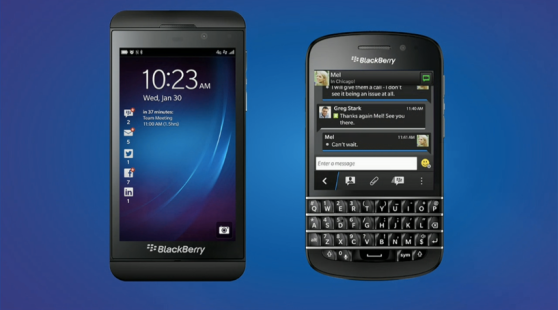 The future of  the BlackBerry is here, and it comes in two varieties.

The company formerly known as RIM has announced the Z10 and Q10, the first devices running its spanking-new BlackBerry 10 operating system.

Longtime BlackBerry fans should be most excited with the Q 10, as it comes with the brand’s trademark physical keyboard.

“We know there are a lot of physical keyboard lovers out there,” BlackBerry CEO Thorsten Heins said.

While BlackBerry didn’t divulge much in the way of the Q10’s specs, it did note that the device comes with what’s called a “glass weave cover.” “You won’t find it on any other device. It is thinner, lighter, and stronger than plastic,” Heins said.

Slightly more standard is the Z10, an all-touch device that features a 4.2-inch screen, 1.5GHz processor, and 16GB of internal storage.

We’ll have more information about the devices as BlackBerry announces it.