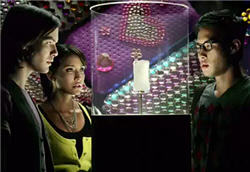 The new 30-second ad for the Google / Verizon / Motorola-built Droid phone is a must-see clip, and not in a good way.

Watch it in YouTube HD format below. I’m pretty sure the ad was made by agency mcgarrybowen, but I haven’t confirmed that yet.

The iPhone isn’t mentioned by name, but the ad’s opening shot invokes the look-but-don’t-touch glass case that confounded Macworld attendees at the phone’s debut in 2007 who wanted to get their hands on an iPhone for a test drive.

Good one. But the ad then moves on to a montage of dolls dressed up as beauty queens, flashing the word “clueless” atop their faces and bodies. Nope, no misogyny here!

It gets worse after that. Here’s the full text of the ad:

Should a phone be pretty? Should it be a tiara-wearing, digitally clueless beauty pageant queen?

Or should it be fast? Racehorse-duct-taped-to-a-Scud-missile fast? We say the latter. So we built a phone that does, does rip through the Web like a circular saw through a ripe banana.

Is it a precious porcelain figurine of a phone? In truth, no. It’s not a princess. It’s a robot. A phone that trades hairdo … for can-do.

How does the ad rate?

The Just Plain Wrong: Likening the Droid phone’s speed to that of the Scud missile, a not-very-fast Russian rocket used by Saddam Hussein’s regime. A Scud killed 28 Americans at an airbase in Saudi Arabia in 1991. Other Scuds have killed lots more civilians in the Middle East.

Is this ad edgy? No, it’s just clueless.