A new document from the federal agency brought to light yesterday for public comment is gaining attention since it indirectly prohibits the kind of super cool drone delivery service retail giant Amazon first presented to the world in a 60 Minutes story earlier this year.

The 17-page document relates primarily to the agency’s interpretation of drones that qualify as “model aircraft.” This is particularly important because the FAA is prohibited from issuing any rule or regulation about a model aircraft. 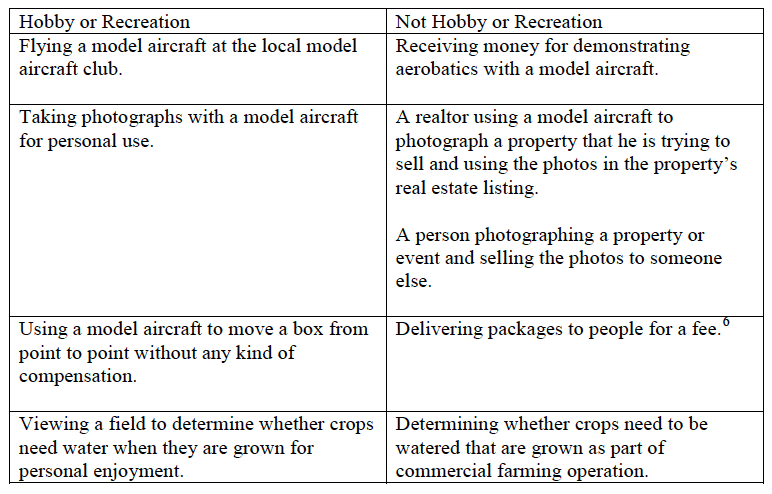 Above: From the FAA document

One of the “Not Hobby or Recreation” activities — “delivering packages to people for a fee” — is being taken as a specific slam on Amazon’s proposal. (A footnote highlights that free shipping by a business is the same thing.)

“The information in the recent FAA notice is not new,” FAA spokesperson Alison Duquette told VentureBeat today. “It simply clarifies the ‘do’s and don’ts’ for model aircraft operators so they can fly safely in accordance with the FAA Modernization and Reform Act of 2012.”

Matt Waite, head of the Drone Journalism Lab at the University of Nebraska, agrees.

“It’s never been under debate whether [Amazon drone delivery] was allowed,” Waite told VentureBeat, noting that CEO Jeff Bezos has acknowledged as much. “Amazon already knew it had to wait.”

Instead of targeting Amazon, Waite said, the new document is really aimed at several small companies that have been using drones commercially.

He pointed to the Lake Maid Beer Co. in northern Minnesota. That company was conducting a specifically Minnesota-style version of a drone delivery service, which air-shuttled beer to ice fisherman. (Now, there’s going to be some — how shall we put it? — dry ice up north.)

Other small businesses being targeted in the document include a drone delivery service for flowers near Detroit and a pharmaceuticals-by-drone operation in San Francisco, Waite said.