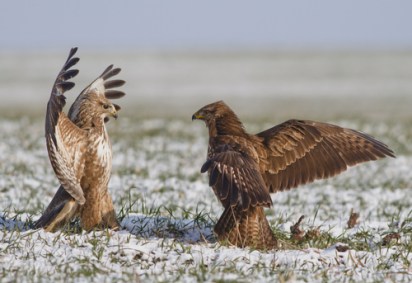 Updated at at 7:38pm with comments from Google representative.

Twitter is not happy with Google‘s new social search features. So unhappy, in fact, that the company is calling it a “bad day for the Internet” and media overall.

“We’re concerned that as a result of Google’s changes, finding this information will be much harder for everyone,” the company said in a statement. “We think that’s bad for people, publishers, news organizations and Twitter users.”

Google introduced its new “personalized,” Google+-enhanced search today. Instead of providing regular Internet results such as photos, videos, news and shopping results that have been the norm for Google’s web search, now the company is pushing Google+ content to the first page of your search queries. A search for photos will push photos from your Google+ friends to the top of the results. Looking for a person? Their Google+ profile will show as a suggested result.

Larry Page, Google’s chief executive officer, recently blogged on the social network that Google had delivered the “+” and was now injecting more “Google.” Now it seems Google+ is starting to push a little of the “+” into the company’s other products.

Twitter, which once had related tweets show up in Google search results, though it does not anymore, is not happy with the change. Many would argue that the short length of tweets, 140 characters, isn’t enough content to act as a “result,” though Twitter adamantly disagrees.

“As we’ve seen time and time again, news breaks first on Twitter; as a result, Twitter accounts and Tweets are often the most relevant results,” statement continued.

Perhaps it is because of its brevity that news is broken so frequently on the site, and can be valuable with the addition of multimedia such as video, photos, and links. Alex Macgillivray, Twitter’s general counsel, tweeted this was a “bad day for the internet” and having worked for Google said, “I can imagine the dissension at Google to search being warped this way.”

Google has not sat idly by, however. The company responded to Twitter on its official Google+ page. The statement reads, “We are a bit surprised by Twitter’s comments about Search plus Your World, because they chose not to renew their agreement with us last summer, and since then we have observed their rel=nofollow instructions.”

Twitter blocked Google from being able to access its data feed of public tweets in July, causing Google to take its real-time search offline completely. The company blames this as one of the reasons why other social results do not show up in searches. One Google spokesperson told VentureBeat:

Google has faced antitrust opposition for months now. In July, the company sent chairman Eric Schmidt to testify in front of the Senate Judiciary antitrust committee about claims that the company was not being fair in its web-based search and other products. Shortly before that, the company admitted to a probe by the Federal Trade Commission (FTC). Why target Google? Well, the company has obvious dominance over the search market and is gaining much popularity in the mobile phone industry. Having this kind of influence requires a level playing field for other companies, less Google become a monopoly.

Recently the company released a new flight search tool, which raised eyebrows among air travel aggregators such as Orbitz, Kayak and even newcomer Hipmunk. Google introduced the tool, which allows you to search for tickets without leaving the Google search website, in September and starting pushing the tool to the top of search results in December. With Google accounting for a good amount of traffic to other travel sites, taking the top search result spells antitrust issues.

via All Things D, Image via VGramatikov/Shutterstock