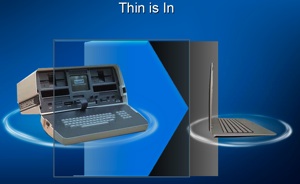 Intel‘s Uday Marty said today that a new Intel processor will bring a different kind of laptop to the mainstream — ultra-thin laptops that fall somewhere between your standard laptop and low-end netbooks.

Why is Intel making a big deal about this now? The company has actually been using the politically incorrect “thin is in” tagline to describe its efforts for a while. But Marty, who directs product marketing for Intel’s mobile platforms group, said a new Ultra Low Voltage Intel Pentium processor will allow these ultra-thin laptops to be sold at a price that’s affordable for mainstream use. He also showed off Intel’s forecasts projecting tremendous growth in this market (see chart below).

The chart is a bit surprising, because it also shows a trend of declining growth. But Intel’s internal studies show that standard laptop owners only take their computers out of their homes 12 percent of the time, half as often as owners of devices like netbooks, and they cite weight as one of the major factors. So there’s room in the market for a device that’s lighter, but has better performance than your standard netbook. Marty said these new ultra-thin laptops will probably cost somewhere between $499 and $1,299, and will have battery power and performance that compares to a standard laptop.

Other just-announced products include three new Intel Core 2 Duo processors and a new Mobile Intel Express Chipset. This announcement comes as chip sales are slowly improving, and after Intel chief executive Paul Otellini declared about the economy, “The worst is now behind us.” 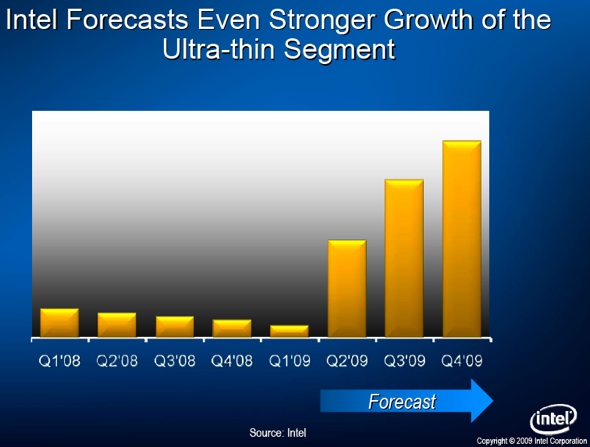