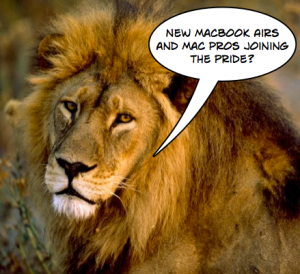 Apple is expected to launch refreshed Mac Pro and Macbook Air computers along with the debut of the company’s new Lion operating system later this week, according to leaked product numbers obtained by 9to5Mac.

The numbers indicate that Apple is releasing four new MacBook Air models — two 11-inch models and two 13-inch models. Both screen sizes are available with and without upgrades, according to the report. The Air won’t look much different from the current model, but will feature under the hood upgrades like a powerful Intel Sandy Bridge processor and quicker Thunderbolt expansion ports.

The same is true of the Mac Pro product numbers, which also indicate four new upgraded models  — Three different levels of desktop Mac Pros (Ultimate, Better and Best) and a new Mac Pro server model, according to the report.

The new Mac models will be the first to ship with Apple’s OS X 10.7 Lion operating system, which has 250 new features.