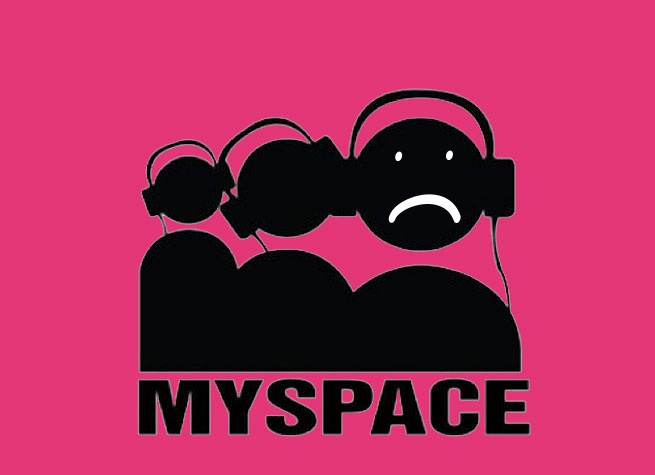 Strapped for cash and fighting for relevance, the relaunched Myspace already has enough problems. But it looks like the company and its music-focused revamp have another, potentially bigger issue: credibility.

The site recently came under fire from digital rights management group Merlin because Myspace is allegedly using many of the songs without permission, as VentureBeat previously reported. Merlin negotiates digital music contracts with thousands of indie labels around the world, and it boasts a library of about 3 million tracks, including those by Ani Difranco, Arctic Monkeys, Arcade Fire, Wilco, and several others. (See a longer list pasted below.)

“This is not bedroom artists hoping to get their music onto the Internet. Merlin’s [song library] is real, commercially significant [music] that’s playing on other services in a way that’s equivalent to the major labels,” Merlin CEO Charles Caldas said in an interview with VentureBeat yesterday. He added that, at one point, music from Merlin’s record label clients accounted for about 10 percent of Spotify’s total business — meaning it’s definitely a crop of songs that people want to listen via a streaming music service.

So, how is Myspace able to use music it doesn’t have permissions for? Well, the music-minded social network permits its users to upload their own songs to the service, essentially allowing them to promote their work to a broader audience that otherwise would only receive attention if it signed a contract with a record label.

This is both Myspace’s most valuable and deadly feature, as many of its users have created dummy accounts to upload their favorite artists’ music. Searching the site for Arcade Fire brings up over a dozen results for artists claiming to be Arcade Fire — including one that sports “ArcadeFireOfficial” in its customized URL.

None of them are the band’s official Myspace page, and what’s more, Myspace doesn’t have rights to publish Arcade Fire’s music, Caldas said.

“The disappointing thing [about Myspace] is that you have a service that’s come in supposedly geared toward enabling and empowering music artists, and its first act is to offer a whole range of songs without the permission of those artists,” Caldas told me.

Having investigated what a standard Myspace artist page is, I find it pretty hard to tell the difference between an illegitimate account and an official page. Artist pages all look professional, and Myspace doesn’t give out a stamp that verifies official artists’ pages. 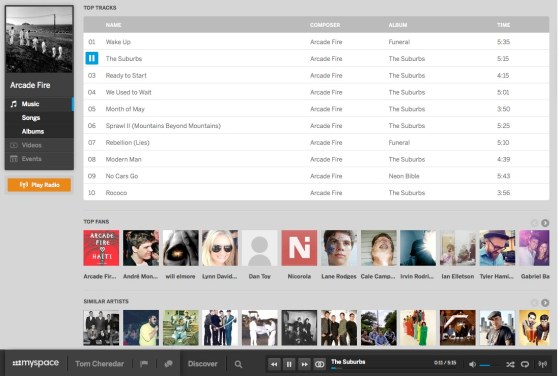 Myspace declined to comment to VentureBeat about its dealings with Merlin, but the company did previously confirm that its users were responsible for any music from Merlin’s library that appears on the site.  Likewise, Myspace’s new terms of service indicates that users are ultimately responsible for what they upload, and that the company will remove any content that it does not have permission to use in accordance with DMCA rules.

YouTube also ran into trouble years ago because of its users illegally uploading videos that contained copyrighted tracks. However, unlike YouTube, Myspace doesn’t have a ridiculously large user base that makes it difficult to filter out songs that the site doesn’t have permission to use. Each artist listed below has less than 15 “dummy” Myspace artist accounts.

Caldas said Merlin previously ran into difficulty with the first iteration of Myspace music after its contract with the site expired in 2011. Merlin has been in continuous negotiations for a new contract with Myspace, but the two parties have yet to reach any sort of agreement, he said.

The conflict over song permissions is something that could prove disastrous to the young music-focused Myspace, according to some critics.

“At this stage in Myspace’s renaissance, it is necessary the company ‘cover its bases’ to avoid negative press or legal issues, which could influence usership and revenues. Even this seemingly minor oversight could be a reputation issue for the company,” said Kenneth Wisnefski, the founder of online marketing firm WebiMax. “The buzz surrounding the network’s return to prevalence could easily be subdued by such negative press and the music-themed site should attempt to renew its license with Merlin as to not limit its extensive track offerings while still adhering to licensing regulations.”

While the attention over music permissions may work in Merlin’s advantage (meaning Myspace is forced to sign a new contract because users want Merlin’s library of music), it doesn’t discount the fact that Myspace is facing a serious problem that could hurt the service overall. The last thing the site needs is people questioning how much of its 50 million song library is actually worth listening to. This is especially true for new users, who may load up their Myspace music queue with tons of tracks from Merlin’s library, only to find out days later that those same tracks are gone thanks to DMCA requests.

At the same time, Myspace could be declining to reach a new contract with Merlin — as well as other smaller record labels — because it simply doesn’t have the money to pay for it. Back in November, it was revealed that the company was seeking a $50 million round of funding to become a true Spotify competitor.

Whatever the case may be, Myspace needs to address these licensing issues quickly, before it develops a bad reputation with the kinds of artists and users it hopes to cultivate in the future.