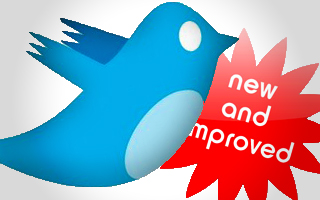 Thursday morning, Twitter started its launch of a brand-new interface.

The changes are fairly drastic, but they have a surprising and delighting effect (as opposed to a shocking and awing one). It might remind you a bit of the design of Facebook’s Timeline or the sadly underrated Yahoo Meme.

Here’s how you can get it for yourself right now: If you have an iPhone or Android device, download the new app from the App Store or Android Market. You’ll see the new interface on your mobile immediately. Then, log into Twitter.com; you’ll see the new changes there, as well.

If you don’t have a mobile device, you’ll have to wait for Twitter’s general rollout.

Twitter’s navigation has been distilled into four buttons: A Home button, which shows the timeline of tweets from people you follow; a Connect button, shaped like a ‘@’; a Discover button, which is the familiar hashtag (#); and a Me button, which contains your profile, your direct messages, your favorites and more. 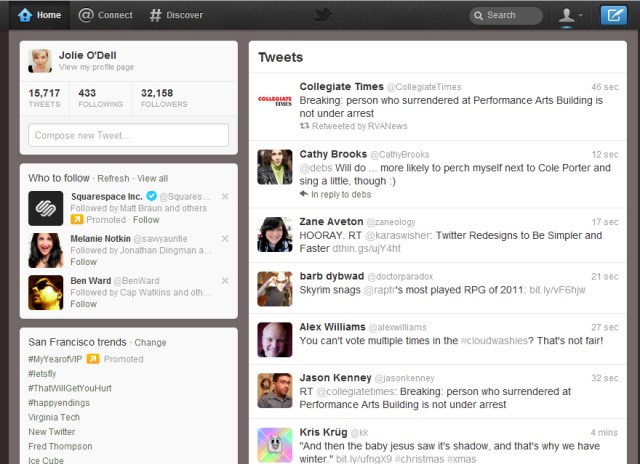 The change isn’t just cosmetic — a lot of features have been moved around, and some have disappeared entirely or have been hidden from public view. The still-new Activity tab, which holds information about what your Twitter friends are up to on the service, is now under the Discover (#) button. That set of data has been separated from “Interactions,” a new section under the Connect (@) button that shows what people are following and retweeting you. There’s also a single button for Mentions, also under the Connect dialog. 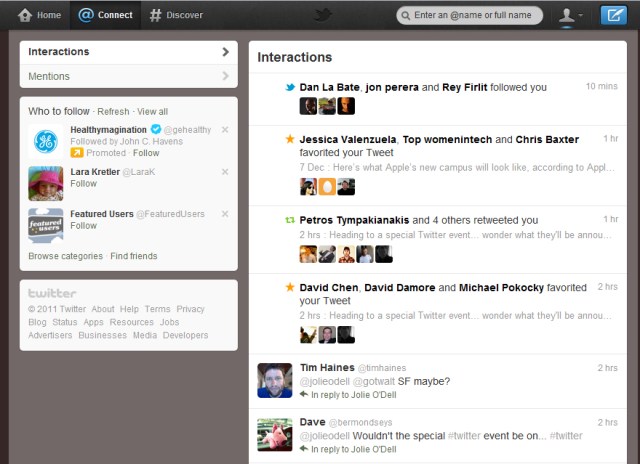 The Discover tab is bringing something entirely new. When you click on it, Twitter will attempt to show you, based on your interactions on the site, the most relevant stories from your world. 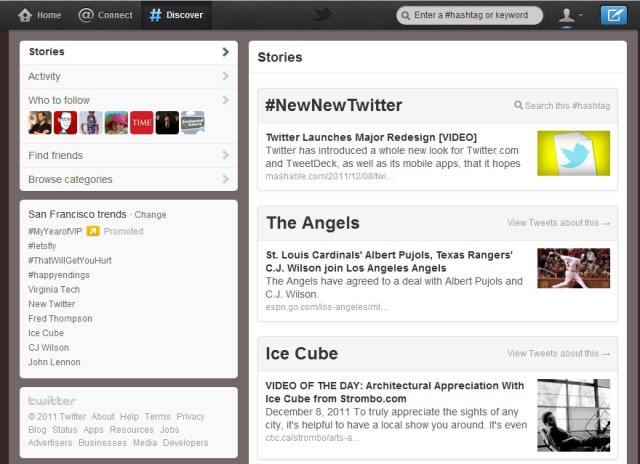 Your profile now has an entirely new look and feel, with a top bar showing your vital stats (tweets, followers, following), a left-side navigation menu for deeper digging, and your tweets themselves on the right. 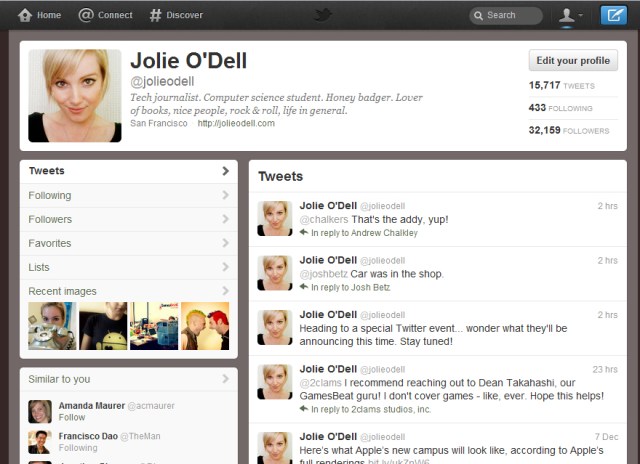 The one thing we’re not seeing any more is the stand-alone ads on the left side of the screen. While Promoted Trends and Promoted Tweets still exist, it looks like Twitter is making good on its promise to serve ads so thoroughly integrated that they look and feel just like every other non-commerical part of the product.

The other big change in the new interface is the slide-out drawer for showing pictures, which showed videos and link information, is gone. Now, you’ll see all that information contained in the tweet itself. Tweets can be expanded with an “open” button to view all the data connected to that message, including retweets, favorites and media. Tweets can be “closed” or collapsed to hide the extra info. And each tweet (and all its multimedia and other data) is embedable. 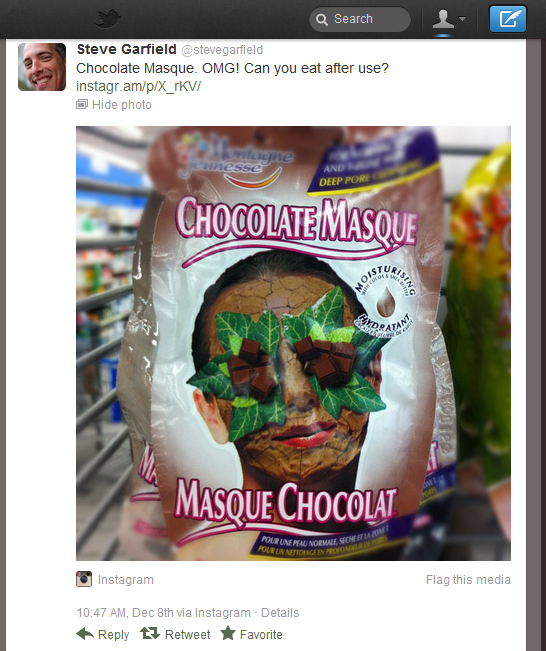 The new interface will also appear on TweetDeck.

Here’s a video explaining some of the changes:

At a press event at Twitter’s brand-new, still unfinished headquarters on San Francisco’s Market Street, executives Jack Dorsey and Dick Costolo explained some of the reasoning behind the new details.

“We realized that the ‘@’ and ‘#’ were being used everywhere,” said Dorsey. “This is the new URL. This is the way people are interacting with content now. But no one knows what these symbols mean. We need to teach people how to act on these symbols.”

A big part of the redesign was actually about education — getting the world’s 7 billion people to intuitively understand how Twitter works and why they should use it.

“The main emphasis was to take the symbols that are unique to Twitter and push them up into the navigation,” Dorsey said of the company’s design process. “A lot of this is around education… We saw the same thing ten years ago when people first encountered URLs. [People needed] an interface that made entry into some of these new things easier, less scary.”

So the Twitter design and product teams decided to lead with what Twitter is best known for: @replies and hashtags. “Our users invented this syntax, and we’re honoring that,” Dorsey concluded.

We had heard in the days leading up to this announcement that core users would be upset about the new functionality. “New-New Twitter” will tick off everyone currently on the site, but only in the way that massive userbases always experience seismic rumbles during any feature change, no matter how trivial.

But, given that the changes aren’t exactly trivial, we’re bracing for stronger-than-usual backlash.

Still, the changes were made to help make Twitter — which is seen as a largely incomprehensible, trendy technology site to a lot of normal people — more appealing to the masses. As Costolo and Dorsey frequently mentioned, the company is now thinking on a human scale.

“We have an obligation to reach every person on the planet,” Costolo said. “There are still billions of people that aren’t yet on Twitter that we know we have to reach… We have to provide the simplest and fastest way for people around the world to connect to what they care about.”