Competition among e-commerce platforms has been fierce historically, with a few names controlling the lion’s share of the market. However, new data gathered by SimilarTech signals a seismic shift in the pecking order of ecommerce platforms in 2017.

Examining data across tens of millions of sites, SimilarTech’s research shows which e-commerce platforms are gaining steady traction and which are stagnating. The graph below shows the market share of the largest ecommerce platforms across the top million sites online today: 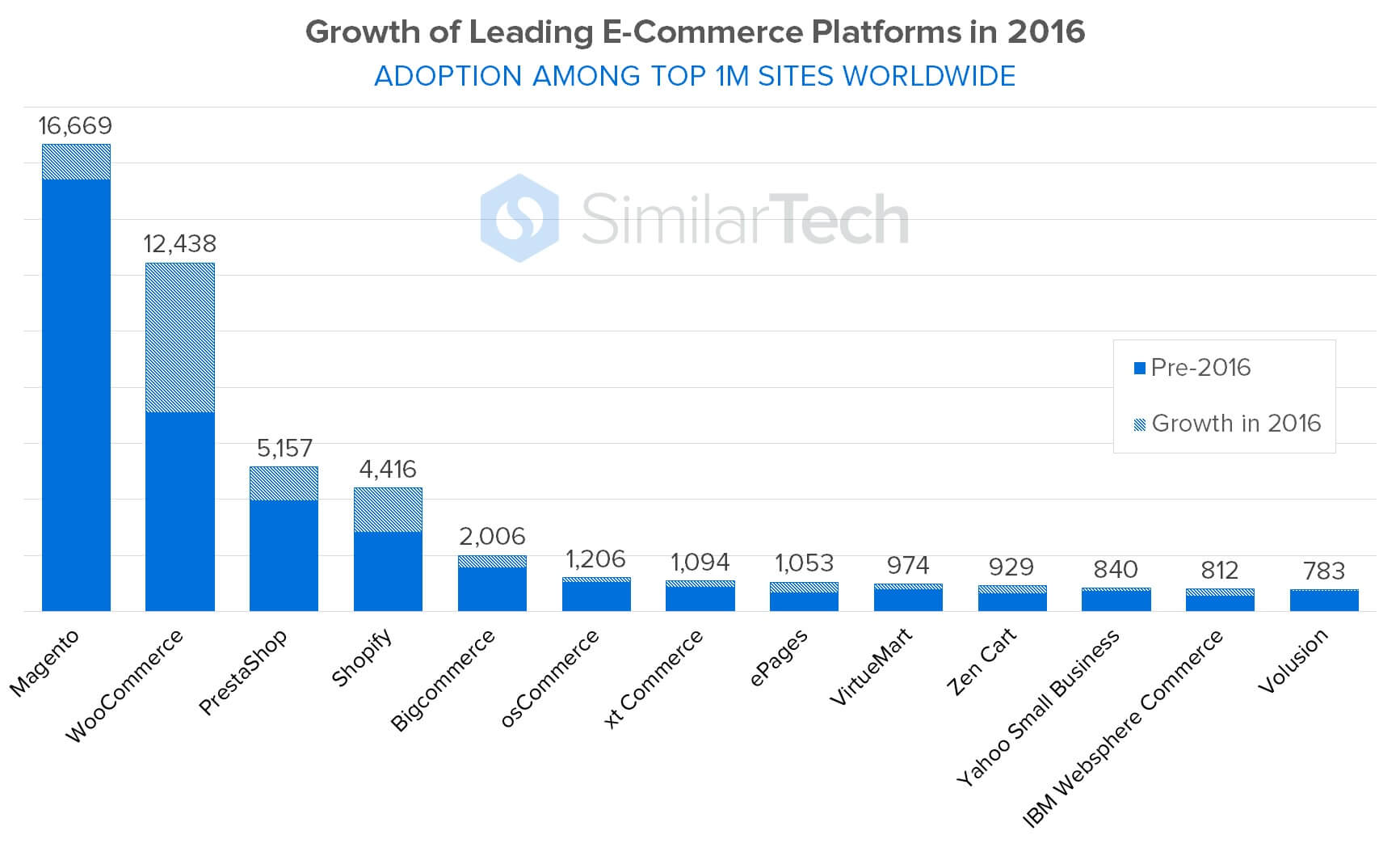 And here are the fastest-growing platforms in the e-commerce space for 2016 based on adoption rate: 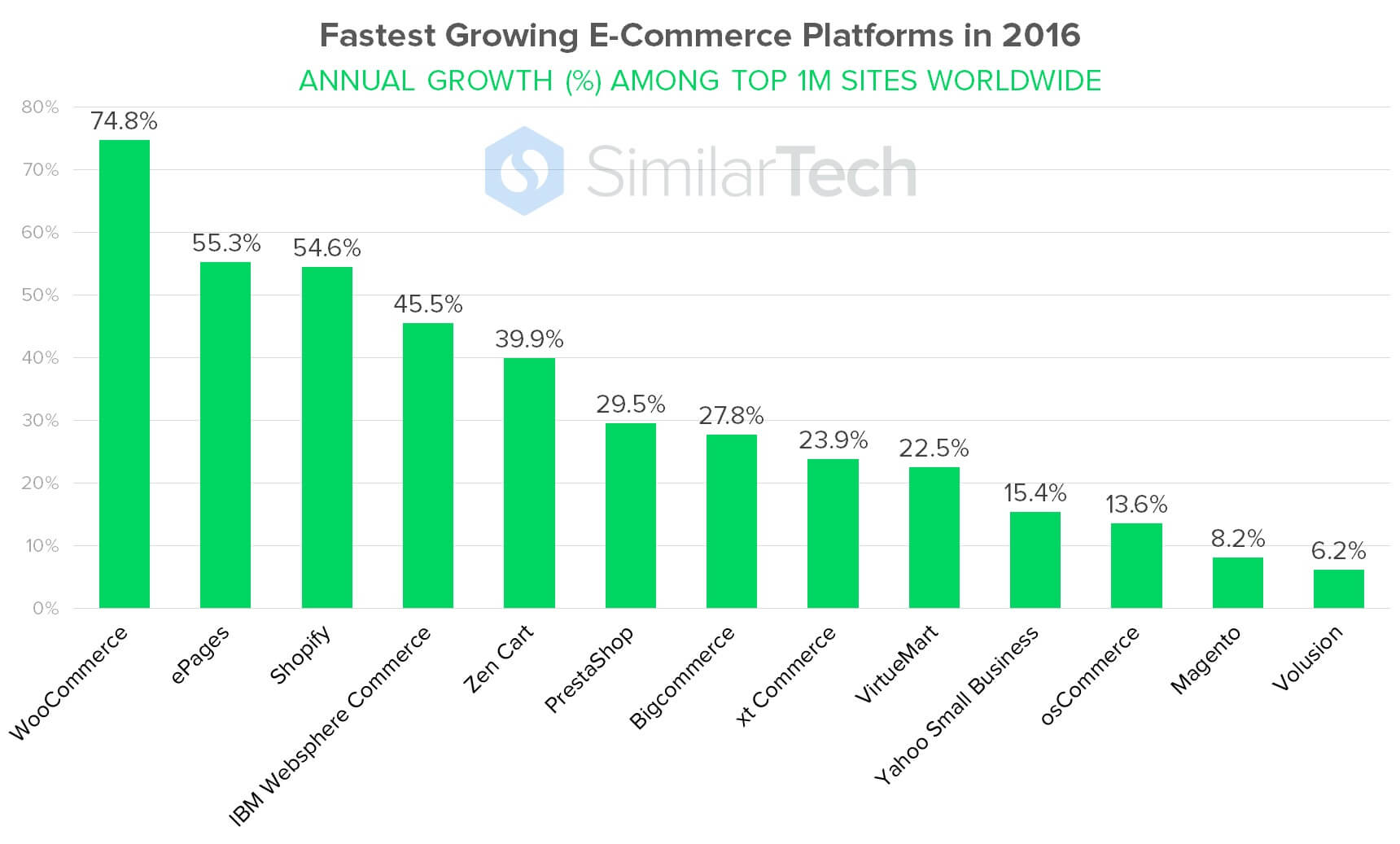 Although players such as ePages and Zen Cart may not yet be household names compared to Magneto or Shopify, 2017 may be the year these platforms hit the mainstream, said SimilarTech marketing director Daniel Buchuk.

Meanwhile, WordPress-based WooCommerce experienced massive adoption last year, as did fourth-place Shopify. While these particular platforms may already be quite well known in the world of e-commerce, the number of new sites adding to them could spell bad news for Magneto.

“While Magento is the undisputed leader when it comes to ecommerce software among the biggest websites, there are players that are growing at a much faster rate, which means this ranking could look very different by the end of 2017,” said Buchuk.

Yotpo, a platform for using customer reviews and photos as marketing assets, offers dedicated plugins for many of the surging platforms, and the company’s data analysts saw installation trends that echo the SimilarTech report’s findings. For example, Yotpo’s plugin installation rate year-over-year (2015 vs. 2016) grew by 178 percent on WooCommerce and 112 percent on Shopify.

Referring to emerging ecommerce platfroms, Yotpo CEO Tomer Tagrin emphasizes the need for modern e-commerce platforms to keep up with the ever-changing nature of selling products online. “Platforms that offer the whole package, including easy access to great agencies and app markets, are the ones that succeed,” he said.

Indeed, the growth of the emerging platforms may have less to do with the platforms themselves and more to do with companies developing new e-commerce tools. In July of 2016, WooCommerce started working with Square to bridge online stores with offline purchases. The ability to integrate easily is quite clearly one of the factors behind the platform’s growth.

Based on the numbers, it’s also clear that diversity, accessibility, and ease of use are quickly becoming the cornerstones of success for modern ecommerce platforms.

Kenny Rueter, cofounder of content delivery platform Kajabi, notes that the fastest-growing ecommerce platforms have common ground despite their differences on the surface.

Given that online retail is expected to experience double-digit growth annually over the next three years, Daniel Buchuk claims that there’s “ample room” for new players in the industry to step forward. With some of the big fish in e-commerce appearing to stagnate, Buchuk may be right on the money.

Meanwhile, Tagrin suggests that perhaps the state of e-commerce has come full circle, mirroring the offline world, thus making integration and bridging of offline and online crucial for future growth, as signified by WooCommerce’s integration with Square.

“Offline stores need to focus on their physical storefront as well as marketing and advertising in a variety of places outside their store. It’s no different,” says Tagrin.

Change appears to be the key ingredient for e-commerce platforms looking to set themselves apart from the competition. As fresh faces in the industry rise, platforms will have no choice but to adapt to the wants and needs of merchants and customers alike if they hope to stand out in 2017.

Total e-commerce sales reached $1.9 trillion in 2016, with trends signaling double digit growth up until 2020. In short, the platforms that facilitate business and drive the world of e-commerce may be more important than ever this year.

Joe Liebkind is a Berlin-based writer. He has worked with startups in sales and marketing roles in Berlin and New York, including at Oktopost and Socedo.