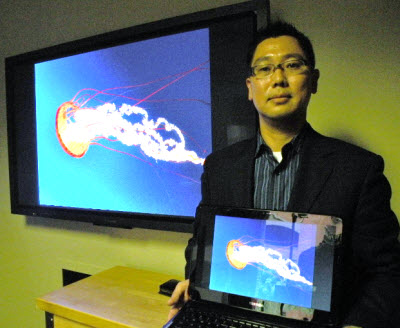 Toshiba is debuting a new laptop at the Consumer Electronics Show that has one very cool feature. You can open up any file and view it on your TV. For instance, you can watch a YouTube video on the big screen of your TV set just by opening it on your computer.

The Toshiba Satellite E205 laptop includes some new technologies from Toshiba’s partners that make it easy to do this, such as Intel and Netgear.  The latter is making a wireless adapter box that lets you connect your laptop screen to any flat panel TV with an HDMI (high definition multimedia interface) cable.

The adapter plugs into an HDMI port on the TV. Then it enables you to send data wirelessly from the laptop to the television monitor. When you walk out of range, it drops your display image. But if you walk back in range, it’s smart enough to display your laptop’s image on the TV again, said Phil Osako, director of product marketing at Toshiba (pictured above). 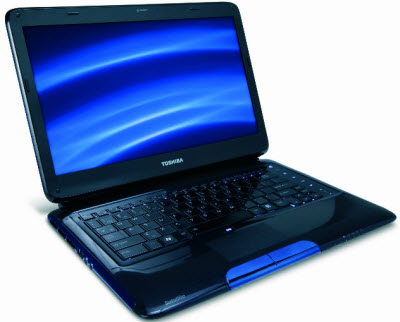 Intel created the chips — its own flavor of 802.11n Wi-Fi and its new i5-430M Core processor — with the wireless display technology. You can’t do this with non-Intel chips, as far as I know. That’s why Toshiba is the lone computer maker with this capability for the moment. Paul Otellini, chief executive of Intel, plans to show off the feature in his keynote speech at CES.

Normally, you would have to use some special hardware adapters with a computer in Microsoft’s Windows Media Center mode to do something like this, or do something similar with a Mac. But it’s never been as easy.

The Toshiba e205 laptop is a thin and light machine with a 14-inch display. It has a backlit keyboard and weighs 5.1 five pounds. It also has an HDMI port and a Universal Serial Bus (USB) port where you can charge your cell phone and other gear even when the computer is asleep.

The laptop has a battery that lasts for six hours. It will be available for as low as $999, only at Best Buy stores. It comes with Toshiba’s own Media Controller, Reel Time and Bulletin Board apps for touch-friendly and remote media use. The Netgear adapter box costs about $100.

Toshiba is also announcing its Toshiba Tecra A11 laptop for corporate users today. The fifth-generation design includes features like shock protection for the LCD display, drop protection for the hard drive, security features, and a different kind of texture. It also has a 10-number keypad. [update: Dell has a new model here too.]