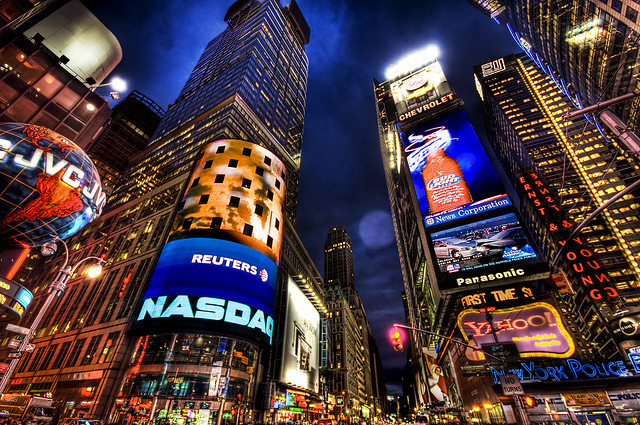 The all-computer run NASDAQ could be to blame for a lack of a Facebook stock pop Friday, when the social network started its first day of trading. Orders flooded in for the stock, but overwhelmed computers and glitches slowed trading down because stock orders couldn’t be processed, leaving investors wonder if their orders had gone through. If Facebook had gone with the New York Stock exchange, where there are redundant backup systems, it might have been a different story.

By now you know that Facebook’s stock didn’t pop in its first day of trading, closing the day at $38.06. Reports emerged yesterday that trading didn’t begin until 11:30 EDT because of computer glitches on the NASDAQ. Investors were left waiting for computer confirmation on their orders and the price they paid for the stock. The NASDAQ’s automated system relies completely on computers that are supposed to be faster and more efficient than human traders.

On the New York Stock Exchange computers run the show as well, but human traders work as a backup. If the computers slow down or crash, real people keep the trading going and can tell you immediately the status of your order and the price of your stock.

Keith Bliss from Cuttone & Co. explained the human trading system on the NYSE in an interview with Bloomberg:

“There is no redundancy inside their (the NASDAQ) market so they’re solely dependent on the computers being able to handle…what’s happening not only inside of the market, but also inside an IPO. Down here on the New York Stock Exchange, we have redundant systems and the redundant systems are the human-based traders who can have an open outcry auction market. If the systems go down, we can get the stock open and get orders into the market, they can execute them and can give you a report immediately.”

In Silicon Valley, we keep hearing that computers are getting closer to replacing humans as processors get more powerful. Researchers are continuing to work towards the singularity, in which we create computers that are smarter than humans (and probably more powerful too — cue a robot uprising).

While it will be decades, if not hundreds of years, before a computer has even close to processing power of the human brain, leaders in the industry are praising computers as faster and smarter than human beings. It’s ironic then that the largest tech IPO in U.S. history may have been hurt by computer-based system.

Do you think if Facebook had chosen the New York Stock Exchange for its IPO that it would have done better? Answer the poll and sound off in the comments.